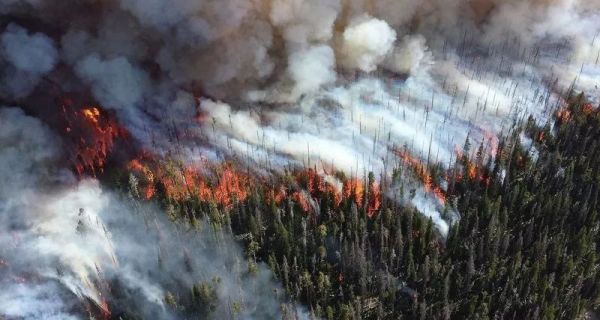 The Copernican Atmospheric Monitoring Service has carried out new measurements of carbon dioxide emissions from forest fires in the Arctic. It turned out that the volume of carbon dioxide released into the atmosphere increased by a third compared to 2019 and set a new record.

Copernicus Atmospheric Monitors measure the activity of wildfires around the world on a daily basis based on satellite observations of their intensity. This data also allows experts to calculate the carbon dioxide emissions from these events.

Zombie fires are fires that smolder underground for months. They can smolder long enough and spread over large areas. These fires occur in warm, dry weather and are most often found in dense peat bogs.

New data shows that CO2 emissions from Arctic Circle fires have increased by just over a third since 2019. From early January to late August, the region’s CO2 emissions were 244 megatons, up from 181 megatons for all of 2019. Moreover, most of the emissions were observed on the territory of the Sakha Republic in Russia.

Experts cannot yet pinpoint the sources of ignition, but they assume that “zombie fires” are responsible for most of the emissions, which smolder underground in the polar region throughout the summer season. In addition to the territory of Russia, the intensity and number of fires in the Arctic Circle increased in California and Colorado. There, the intensity of fires turned out to be one of the highest in the last 16 years.