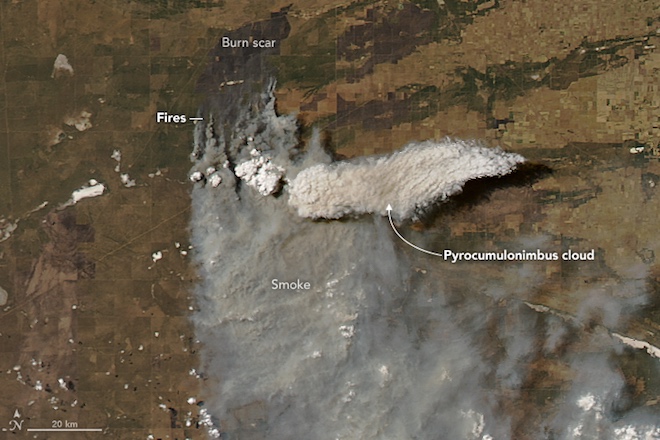 Annually in Argentina there are about 12 000 fires burning out more than 1.3 million hectares of forests and meadows. The MODIS Spectroradiometer on NASA’s “Aqua” satellite received an image of one of them on January 29.

The fire burned in the province of La Pampa, in an area where cattle graze among thorny bushes and small trees. The cause of the fire was not established, but it is known that ranchers regularly fires in this region in order to improve the quality of livestock feed.

The image shows a long cloud in the form of cauliflower, spread over the dark smoke. The clouds of Pyrocumulonimbus, also called cumulonimbus flammagenitus, are similar to cumulus clouds, only in this case the heat that causes the air to rise (which leads to cooling and condensation of water vapor) comes from the fire, and not from the sun. To classify the cloud as pyrocumulonimbus, the temperature at its upper end, fixed by satellites, should be -40 ° C or even less.

The color of the smoke is affected by several factors, including the temperature of the fire, the composition of the fuel and the amount of moisture in the smoke. Probably, because of the optical effect, the cloud appears brighter than the previously formed smoke beneath it. “Particles that formed later are smaller in size and do not diffuse light much like larger smoke particles that exist longer. As a result, the smoke looks brown and looks more like dust, “explained Santiago Gasso, an atmospheric expert at the NASA Space Flight Center in Goddard.

Pyrocumulonimbus clouds can produce thunderstorms with lightning and heavy rain – sometimes precipitation falls so much that they help put out the fires that created them. In this case, however, the fire continued to burn and the next day, as evidenced by satellite imagery.