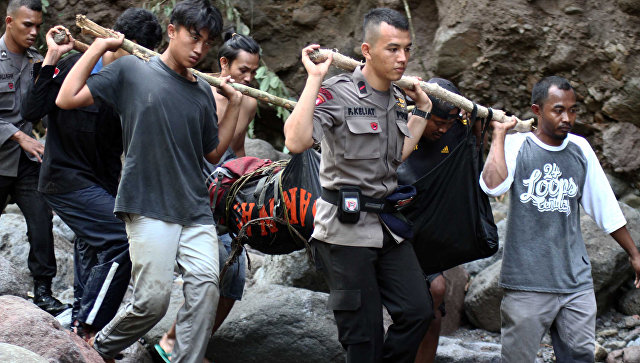 At least 10 people were killed, two were missing and 30 were injured of varying severity in floods and landslide in the Western part of the main Indonesian island of Java, said on Wednesday the head of the information centre of the National Directorate on liquidation of consequences of natural disasters (BNPB), Sutopo Purvo Nugroho (Sutopo Purwo Nugroho).

Currently, the combined teams of rescuers carry out search and rescue operations jointly with the armed forces, police and volunteers, he was quoted by online news portal Detik.com.

Earlier official representative of the search and rescue management (Basarnas) of West Java province declared two dead and one missing in a landslide in the village of Cinerama district Sumedang.

During another natural disaster torrential rains in zapadnobacki district Garut caused flooding in which the water level in some places reached two meters. Garut eight people died, one missing, four were seriously injured and 26 light. Hundreds of local residents have lost their shelter.

Currently, the water in some places (Garut) subsided, — said Nugroho.

Experts explain often occurs in Indonesia during the rainy season landslides are active deforestation. In December 2014, over 100 people were killed or went missing in the landslide near the town Gamblung in Central Java province, about 600 people lost their homes.

In October of 2010 in the province of West Papua torrents of mud up to three meters hit the city and its surroundings Vasior, demolishing houses and bridges. Victims of elements became more than 160 people, almost as many missing, injured nearly 3.5 thousand local residents.