Baikal is on the verge of ecological disaster 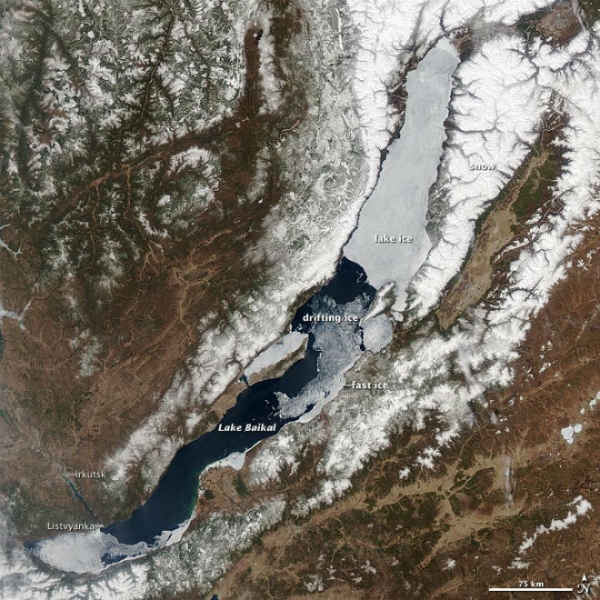 Lake Baikal, which is 25 million years old, UNESCO heritage site, is on the verge of ecological disaster. Planned Mongolian hydro project could potentially disrupt supply and cause a tsunami in the event of any seismic activity common in this region.

The lowering of the water level of lake Baikal has caused a drying-up of wells located within a radius of 300 km, 13 towns on the lake face a shortage of supply. According to some opinions, a comparison of lake Baikal the Aral sea is false, as the Aral sea, once one of the four largest lakes in the world, has dried up significantly because of plants.

Baikal is larger than Belgium, contains 23 615 cubic kilometers of water. The lake is the largest reservoir of fresh water on Earth. It contains 20% of unfrozen drinking water on the planet and is home to rare and diverse ecosystem.

In January 2015, the lake level fell to the lowest point registered during the last 60 years, the authorities in Buryatia and Irkutsk regions declared a state of emergency then. Massive forest fires, which greatly devastated the area around lake Baikal in September 2015, have also damaged the balance of water in the lake, literally killing the waterway. Many experts have warned that the situation was close to catastrophic. Human impact has left a trace in the life of lake Baikal and can destroy the purest lake on the planet.

According to local media, three hydroelectric plants were planned on the Selenga river and its tributaries, which can cause the drying of the lake. Baikal may disappear as the Aral sea. Mongolian hydro project may represent a serious risk to Ulan-Ude, the Buryat capital, in the case that one of the three planned dams survive the accident.

Hydrological experts believe that one of the power plants will be located in a seismically active part of Mongolia and any earthquake can cause overflow of the accumulated water is able to wash part of Mongolia for half a day to reach Ulan-Ude (a city with population of 415 thousand people).

The water velocity will be comparable to a tsunami. Environmentalists warn that the Mongolian can cause meteorological, biological, hydrological and geological changes. The quality of water, ice and temperature will also change. Additional emissions of greenhouse gases will lead to increased threats of flooding in some areas. Migration of animals, rare species of fish is not excluded.