Bloodbath on a Scottish beach: Three whales died on the beach 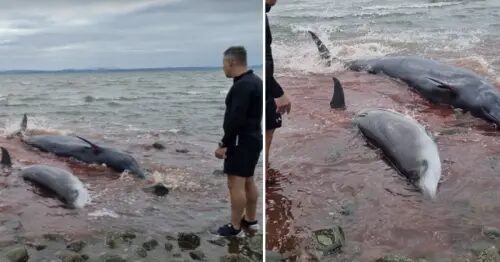 Two whales were in the water and another one was further down the beach in huge puddles of their own blood.

A bloodbath unfolded on a Scottish beach where three whales tragically died.

Two of them were in the water, and another was further down the beach in huge pools of their own blood.

Local dog handlers rushed to their aid and called emergency services around 7:30 a.m.

But it was too late for the sea creatures, who died a short time later.

Local resident Jim Howe, 50, was walking his three cocker spaniels with his wife, Jacqueline, 52, along a nearby storm wall when he noticed something strange on shore.

Personal trainer Jim told the Record newspaper, “I noticed something flapping and went down to take a closer look.

“I noticed three whales there, one farther out in the sand and two others closer to the water.

“Their eyes were open and they were all making noises.

“One of them was lying on the rocks, constantly turning over to get out, but puncturing himself in the process.

“There was blood everywhere.

“It was horrible, I had never seen anything like it before.”

After calling the Coast Guard and lifeguards, Jim posted a notice on social media, after which he and Jacqueline rushed home for buckets.

Soon after, about 30 locals descended on the shore in a desperate attempt to keep the animals alive by watering them.

But their heroic efforts were in vain: by the time the ambulance crew arrived on the scene, all the whales had died, too heavy for the locals to try to lift them back into the water.

“It was a real effort by everyone, but there was nothing else we could do,” added a frustrated Jim.