Breath of the volcano Etna 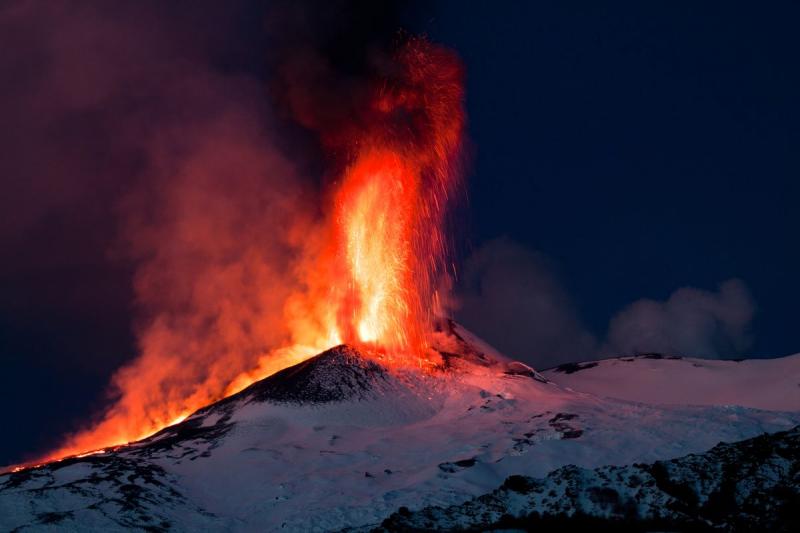 Etna volcano “breathes” on the 3D animation of NASA. Computer model shows how changes in magma chamber of the volcano deformed the ground around the mountain.

Etna — an active volcano on the Italian island of Sicily. Its last eruption is quite small — took place on 31 March 2016. About volcanic activity Etna misleading manuscripts from thousands of years ago. The Greek historian Diodorus Siculus wrote about the eruption of Etna in his “Historical library”.

Although most of the recent “explosions” of Etna was moderate, the volcano has seriously threatened the people and their dwellings in the past. A huge eruption devastated several villages in 1669, and in 1928 the volcano spewed lava flows that crossed the village of Mascali, almost completely destroying it. Among the most recent eruptions of the volcano — violent night fire show captured on video in 2015.

Due to its popularity and proximity to human settlements, the Etna volcano is under close observation. Animation NASA, originally published in 2012, but became popular just this week, uses data from satellite monitoring of the volcano.

To create the model, researchers have resorted to radar interferometry, a technique that detects changes in the radio waves reflected from the earth. Two satellites of the European space Agency took over the Etna, radiating from the top of the radar waves. Over time, the researchers were able to create a 3D model of how varied the surface of the Earth when the satellites revolved around her orbit.

In this animation, the slopes of Etna increased and decreased, as its magma chamber is inflated and deflated from 1992 to 2011, the Camera is almost 5 km below sea level. Scale with the color codes in the top left corner video shows how much the ground rises and decreases the range of about 25 cm lower right — time video, which shows a strong eruption in red, moderate — yellow, and periods of calm — white. On direct marked volcanic events since the last major eruption of mount Etna in 1992.