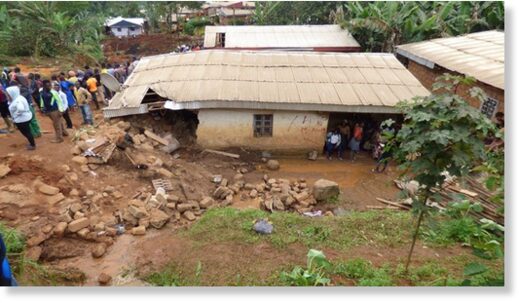 A family of 6 was killed by a lightning strike, and a landslide killed 2 people – after heavy rains in Cameroon.

It is reported that six people from the same family in the city of Banguraine in the Western region of Cameroon were killed by lightning, and two more were buried under a landslide the next day in Fumban.

On Tuesday June 15, four women and two children from the same family in Banguraine were struck by lightning as thunderstorms and heavy rains hit Cameroon’s western region.

The 6 victims were internally displaced persons from the crisis-affected northwestern and southwestern regions of the country who had left to seek asylum in the neighboring Western region.

In addition, two children from the same family were buried under debris after the walls of the building collapsed in another village in Fumban County on Wednesday, June 17, after heavy rains.

It is reported that the bodies of an eight-year-old boy and a twenty-year-old girl were recovered from the rubble by Red Cross officers and other local residents.

Two more children, one 8 months old and the other 6 years old, were found alive.