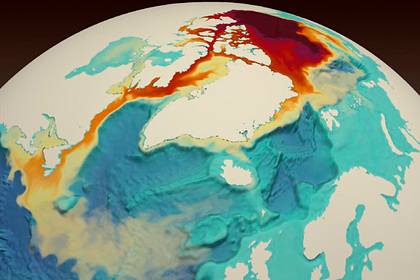 Scientists at the University of Washington, Los Alamos National Laboratory and the National Oceanic and Atmospheric Administration (NOAA) have found that the freshwater content of the Arctic Ocean has increased by 40 percent over the past two decades. The intrusion of fresh water into the Atlantic Ocean could have a catastrophic effect on the global climate. The article was published in the journal Nature Communications.

According to scientists, the accumulation of fresh water is due to the melting of Arctic ice. Currently, fresh water sits on top of salty water and is held back by the winds in the Beaufort Sea, forming a kind of water dome. If the winds ease, fresh water will penetrate the North Atlantic, including the Labrador Sea. This, in turn, will affect the large ocean currents in the Atlantic Ocean, as well as the circulation of cold and warm waters.

The researchers’ conclusion is based on ocean circulation simulations that tracked the spread of fresh water in the Beaufort Sea between 1983 and 1995. It turned out that most of the fresh water reached Labrador through the Canadian Arctic Archipelago. During this event, the salinity of Labrador decreased by 0.2-0.4 parts per thousand.

At present, the volume of fresh water in the Beaufort Sea is twice as large as last time, and amounts to 23 thousand cubic kilometers. Although the exact impact of such a freshwater bomb on the Atlantic cannot be predicted, scientists believe that it will have a serious impact on the climate of the entire Northern Hemisphere.