Catastrophic flooding in China and Pakistan 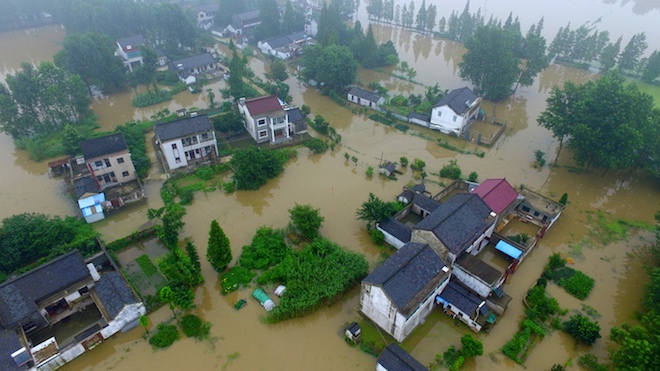 Catastrophic flooding has claimed more than 150 lives in China and Pakistan.

China rains have killed 128 people, 42 missing. Landslide in Guizhou province buried alive 23. 8 residents of the city of Wuhan in Hubei province died under the rubble of the fallen wall.

More than 450 millimeters of rain fell in the city of Macheng in 4 days. The rain ended at 8 a.m. local time on Monday. The flood destroyed 40 thousand homes and displaced 1.5 million people in 11 regions, mostly along the Yangtze river and its tributaries. About 600 thousand people are in dire need of housing.

The rain destroyed 283 thousand ha. Floods and landslides affected the telecommunication and electric line, which in some regions there were faults with transport. Economic losses are estimated to 5.73 billion.

State television showed, as the people floated on the flooded streets in boats in the Eastern province of Anhui. From June 18 there were 18 deaths, 4 missing due to heavy rain.

In Pakistan, heavy monsoon and floods claimed at least 30 lives and washed mosque in the town of Chitral. 13 the people of Chitral still remain missing.

The mayor of Chitral Maghfirat Shah said that the flood waters came while the people were offering special prayers in honor of the month of Ramadan in the mosque. Dozens of worshippers were carried away by flood waters, which destroyed the mosque and damaged several nearby houses and security post.