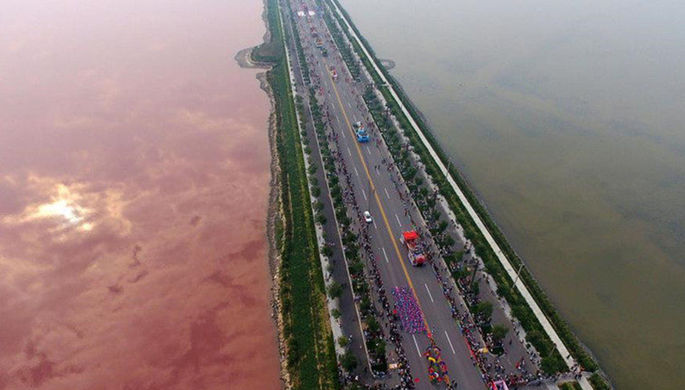 In China (Shanxi province) the salt lake Yanghu like divided into 2 parts — green and pink. The lake separated by a road on one side of which the water remained the same color, and the other turned bright pink hue.

The lake water is stained because of the green unicellular algae Dunaliella salina (Dunaliella saltwater), mainly found in salty seas, where they survive due to the high concentration of beta-carotene and glycerol to protect them from the osmotic pressure and light emission.

Lake Angu is one of the three largest inland salt lakes in the world. The salt content in it close to the Dead sea, so it is called the “Chinese dead sea”. In the Neolithic in the area lived different nomadic tribes. The lake’s area is 54 square kilometers, it is located 72 km West of the city of Urumqi.