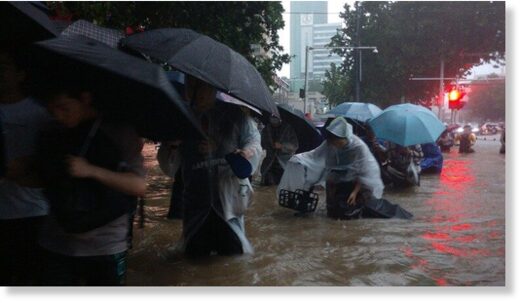 Subway passengers in Zhengzhou, China’s Henan province, were trapped Tuesday by rising rainwater as rivers overflowed their banks, flooding streets and disrupting train traffic after 200 mm of rain fell in one hour.

Footage circulated online shows subway passengers in muddy water nearly shoulder-deep in a train car, and train service was suspended amid the chaos caused by the deluge.

Although there have been no reports of deaths or injuries, the province’s transportation infrastructure has been severely affected by severe storms and heavy rains since the weekend. Henan is a major regional transportation hub, but roads and tunnels were severely flooded, with cars and buses floating in muddy floodwater in some areas and streams of water flowing through streets.

Elsewhere in the province, water levels in the Yi River threaten to damage the UNESCO World Heritage-listed Longmen Buddhist grottoes, which house statues that are thousands of years old.

Flooding caused an explosion at an aluminum alloy plant in Dengfeng, Henan, after water gushed over the walls of the plant and into a high-temperature solution in a tank, creating a fireball at the plant. No one at the plant is believed to have been hurt or killed, although Dengfeng Power Group has yet to comment publicly on the incident.