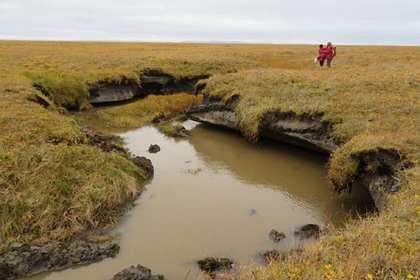 An international team of scientists from Germany and Norway found that thermokarsts can significantly enhance permafrost thawing in the process of climate change. This will quickly lead to emissions of significant volumes of carbon dioxide and methane, which will further warm the Earth’s atmosphere and accelerate the climate catastrophe. A summary of an article published in Nature Communications is provided in a press release on Phys.org.

Specialists developed computer models to determine the effect of thermokarst processes on permafrost in North-Eastern Siberia, where the permafrost zone remains stable at present. Thermokarsts occur when ice melts in the ground, when the surface settles and depressions form, filled with water. Such changes in the surface topography may increase the thawing of permafrost.

It turned out that when thermokarsts are included in the model, even stable permafrost in Siberia can thaw at the end of this century, although at present the temperature of the soil is minus ten degrees. Norway has already seen a reduction in permafrost and the formation of numerous ponds. With moderate warming, thermokarst processes can slow down thawing, however, in a scenario with a significant increase in average temperatures, the degradation of the permafrost zone will intensify due to positive feedback.