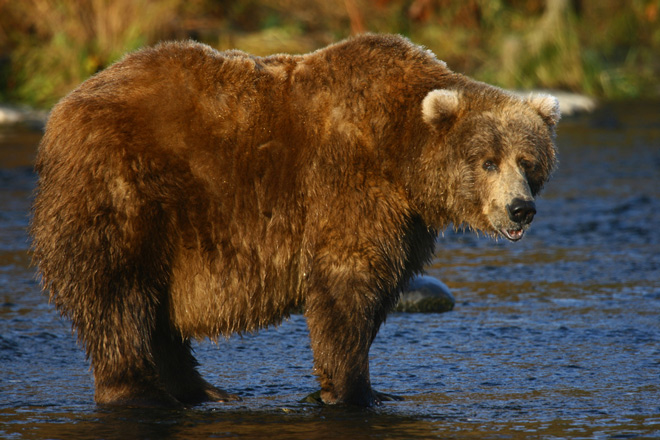 Climate change affected the diet of the Kodiak bears. The study was conducted by zoologists from the United States, finding out that the animals had to abandon the fish.

The fact is that the usual summer ration of bears – sockeye salmon, sailed to spawn in rivers and lakes in the summer. The Kodiakis ate fish first – in July it is the most vulnerable and nutritious, and by the end of spawning the Red Elder ripened and they switched to berries – in late August and early September.

However, over the past few years, due to the temperature increase, elderina began to keep up much earlier – in the midst of spawning. Bears began to eat at once berries, neglecting fish, in spite of the fact that this diet, undoubtedly, for animals would be more nutritious.

American scientists have analyzed how in the past half century the spawning season has changed and senescence of elderberry. It turned out that the fish sailed to spawn at the usual time – from July 19 to August 2. In this case, elder a few last years began to ripen also to the beginning of spawning.

The zoologists studied the aerial survey data, on some bears they put on GPS-sensors, analyzed their litter to get information about their diet. It turned out that in conditions where both sockeye and sockeye became available to the bears simultaneously, the Cadiaks made a choice in favor of the latter. On the one hand, this decision may seem unreasonable. However, according to scientists, bears optimize their diet.

Now zoologists are interested in how these changes will affect the overall ecosystem, and how the bears are going to replace elderberry in the fall – in fact unlike the previous years, at this time of the year it will already blossom.