Climate change has affected the lives of the northern peoples 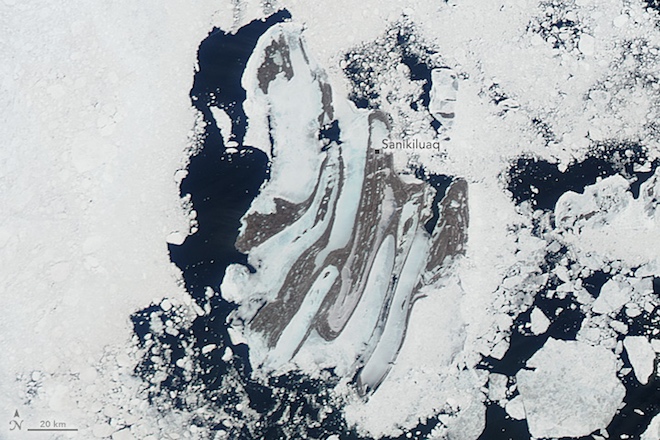 Rhythms of sea ice play a central role in the life of many communities along the Hudson Bay, the shallow inland sea in the northeast of Canada. The most striking example is the Sanikiluak Intuite village, the only settlement of the Belcher archipelago located on Flaherty Island in the southeastern part of the bay.

Every year during the winter the Belcher Islands are bound by a thick layer of sea ice. With the arrival of warmer and longer days in May and June, the ice begins to melt and disintegrate. By July, as a rule, the archipelago is already completely surrounded by water.

The image of the islands was obtained on May 28 with the help of the MODIS spectroradiometer on NASA’s “Aqua” satellite. The fast ice (adjacent to the shore) was still filling many of the coves, but around the island group there appeared areas of open water called polynyas. For most of the Hudson Bay, with the exception of the wormwood, the pack ice lay still.

The cold climate on the Belcher Islands makes large-scale agriculture impossible. Instead, the central place in the economy of the village is occupied by hunting and fishing. Numerous coves create a favorable habitat for ducks, whales, walruses, seals and fish. Intuition hunts them on foot, on boats and snowmobiles. They have become real experts in tracking migratory communities, have learned to use currents and floating ice to reach areas where wild animals gather.

But climate change has made the behavior of sea ice less predictable, which is why it was more difficult and dangerous to get food. Veteran hunters told about their observations in the framework of the Sanikiluaq Sea Ice project. The interviews were part of the efforts supported by the National Science Foundation, which facilitates the collection, preservation and exchange of information on environmental changes observed by indigenous communities in the Arctic. The researchers placed interviews and maps based on MODIS data on the website, which details the observation of changes in ice conditions.

Time of destruction of sea ice in some areas of the Hudson Bay has changed, and the spring melting now begins a few weeks ahead of schedule. Some scientists predict that in the future, warming in this region can shorten the duration of the ice cover for seven to nine weeks. It is assumed that the most pronounced changes will occur in the southeast of the Gulf.