Climate change has intensified the hurricanes 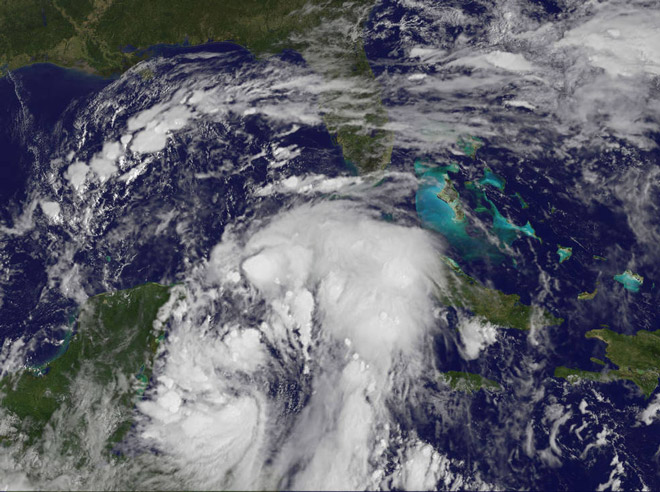 The Atlantic continues the active hurricane season, and its last representative is the tropical storm Nate, which recently hit Central America and is now heading across the Gulf of Mexico to the US shores.

Here are some facts about this deadly storm, about how such systems are formed and what role climate change plays in this.

The tropical depression of 19 on Thursday turned into a tropical storm that hit Nicaragua, Costa Rica and Honduras and led to the death of more than twenty people. As of Friday evening, the storm followed the Mexican peninsula of the Yucatán.

According to forecasts, the eye of the storm will be to the east of New Orleans Saturday night or Sunday morning, which will make it the third hurricane that hit the mainland of the United States in the last six weeks. Warnings about the oncoming elements were announced for most of the northern coast of the Gulf of Mexico, from Louisiana to Florida.

As expected, “Nate” will miss areas from Puerto Rico to Houston, most affected by other recent hurricanes. However, the territories that have been hit by the disaster can be severely damaged if the storm continues to grow.

The waters of the Gulf of Mexico and the Caribbean remain very warm, which helps the hurricanes gain strength, increasing the speed of the wind. According to the Climate Prediction Center, numerous conditions, such as the high sea surface temperature and the strong West African monsoon, lined up to make the Caribbean Sea and part of the tropical Atlantic – the so-called “Stormy Development Region” – the most suitable place for the formation of hurricanes.

And although some scientists argue that no weather-related event can be associated with climate change, two centuries of burning fossil fuels have changed the global temperature – and this has obviously affected the activity of the hurricane season.

Hurricanes form, taking energy from warm ocean water and turning it into mechanical wind energy. Those that develop in the Atlantic basin, including the Atlantic Ocean, the Gulf of Mexico and the Caribbean, are often spawned by late summer thunderstorms that come from the west coast of Africa near the islands of Cape Verde.

Due to the rotation of the Earth, Atlantic hurricanes rotate counter-clockwise. This is one of the forms of a tropical cyclone, which is also formed in the Pacific Ocean. In the western part of the Pacific Ocean, these same storms are known as typhoons. However, those that form in the Southern Hemisphere rotate clockwise.

As the formation of hurricanes, they can slow down, weaken or even completely subside, if they pass through fairly cool water, or their upward flow is blocked by winds of the upper level, or if they encounter too strong a wind shear. The complexity of these factors, as well as the volatile nature of the winds make it difficult to predict their exact routes of travel and the degree of danger to the regions.