Climate warming leads to massive bird deaths in the USA 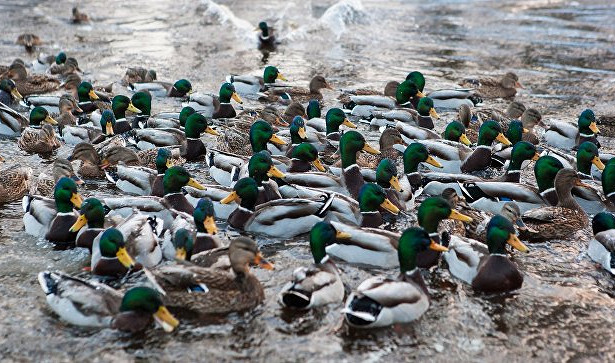 Mysterious botulism epidemics, periodically killing tens of thousands of birds in the north of the United States, were generated by the “flowering” of green algae in the waters of the Great American Lakes, an article published in the Journal of Applied Ecology says.

“Our observations show that increasing the temperature of lakes leads to a rapid multiplication of algae, which in turn leads to massive loss of birds.” In the future, the water will warm up even more, which may lead to a rise in such outbreaks of botulism, “writes Karin Prince (Karine Prince) from the University of Wisconsin in Madison (USA) and her colleagues.

Beginning in the 1960s, residents of the north of the United States and southern Canada began to notice that local waterfowl began to massively die every year from botulism and other supposedly bacterial infections. Despite the fact that such epidemics are dangerous not only for birds, but also for public health, their roots remained a mystery to scientists.

The prince and her colleagues were able to uncover this secret, using the help of ordinary citizens who agreed to patrol the shores of lakes and inform ecologists about all cases of strange death of birds. Observing this way for the feathered population of the Great Lakes over the past seven years, scientists were able to find out what caused these epidemics by comparing the results of observations of volunteers with satellite imagery.

As it turned out, the birds were infected with botulism in no way by accident – the centers of mass mortality of birds were concentrated in certain regions of Lake Michigan and its “neighbors”, for which relatively high surface temperatures were characteristic. Warm water, in turn, causes algae to multiply actively, as a result of which the concentration of oxygen in these parts of the reservoir is sharply reduced.

This creates ideal conditions for the reproduction of bacteria associated with the development of botulism. Such a theory, scientists believe, explains well why the outbreaks of this disease occur more often today than in the past – today the temperatures of the Great Lakes waters have become noticeably warmer than in the past due to global warming and the increase in episodes of anomalous heat.

In the near future, scientists plan to continue monitoring the spread of botulism among birds to assess what threat these outbreaks can have for the birds themselves and for residents of coastal areas.