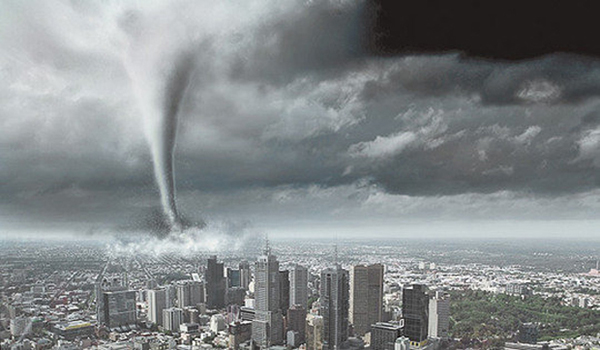 Man was always afraid of natural disasters and at the same time tried to control them. A well-known fact – bell ringing helps to fight hail, spraying of conventional cement in the clouds temporarily interrupts the rains. Thanks to the influence on the ionosphere, it is now possible to provoke tsunamis and hurricanes.

There is no official confirmation of the existence of a military “weather weapon”, but back in 1978 a convention was adopted to ban the negative impact on the climate, which was signed by the USSR and the United States in particular. But the “battle for the weather” seems to be continuing.

If you believe the experts, today the existing climate weapons do not exist. But research is underway in Russia and the US at full speed. The prospect of a real creation of combat climate weapons is rather remote – it will take several decades.

Developers of non-conventional types of weapons do not stand still. As reported by the press service of the United Instrument-Making Company (OPK), a program for creating weapons on new physical principles – radiation, gene, psychophysical and wave. This exotic weapon, according to the company’s statements, may appear in the Russian army after 2020. Military research institutes, design bureaus and laboratories continue to conduct scientific research in the creation of non-lethal weapons – that is, one that does not kill. Russian scientists, for example, have already created a device that can disable the enemy’s electronics. A beam gun at a distance stops tanks, knocks fighter jets or unmanned vehicles, undermines radio-controlled mines. The first samples of new radio-electronic weapons were demonstrated within the closed display at the military-technical forum “Army-2016”.

“Climate weapons, as a manifestation of higher power, are known to mankind from biblical times,” says Alexander Zimovsky, an expert on long-term forecasts. – The Bible contains at least fifty examples of how saving the righteous or punishing the guilty occurs as a result of cataclysms associated specifically with the weather. The Flood in different variants is present in practically all known ancient and existing world religions. This is the historical nature of human knowledge. It is necessary for a person to master a certain knowledge or technology, as he begins, first of all, to consider new possibilities from the point of view of use for military purposes.

When analyzing the combat capabilities of climate weapons, one must proceed from an understanding of the fact that the weather is not a climate. The snow that suddenly fell out in June in St. Petersburg is a weather anomaly. The beginning of the ice drift on the Neva in June for 5-10 consecutive years is a signal about possible climate change. In the first case, we can already achieve the desired result by applying technologies for the artificial deposition of water vapor. It will be very expensive, there will be very little snow, but enough for Selfie, and for what is usually called “old-timers do not remember.”

“If we are talking about the hypothetical (on a planetary scale) application of climate weapons,” Alexander Zimovsky continues, “we must understand that the results of its application can manifest themselves at very significant intervals. London is located on the latitude of Astana. In Astana, the temperature drops to -51 ° C, in London it never fell below -10 ° C. And notice, this temperature minimum was recorded on a time interval of 600-700 years. For a modern war, such rates are not that unacceptable, they are meaningless.

In fact, tactically what do we need? Yes all the same. The enemy is coming-it means, in our interests, the generals Dirt and Frost. We are advancing – therefore, the terrain must be passable, rains us to nothing.

Another example. Aviation is considered all-weather, like the ocean fleet. But this again, the question of theory: the excitement of more than three or four points – and the aircraft carrier is just a target, it is incapable, the deck aviation will not take off. It would seem, which is easier? “Wind, wind, you are powerful, you are flying clouds of clouds” … Keep the stormy weather in the area of ​​operations of the 6th US Navy, and all the cases. However, neither we nor the Americans have learned to use typhoons in the fight against carrier groups.

And if we already talk about the real combat capabilities of the world’s largest players, then, despite all the current research, the only weapon that creates a short-term, medium-term and long-lasting climatic effect is the atomic bomb. ”

The Winter Olympics in Sochi in February 2014 was held at a high level – these sports games became an element of Russia’s prestige and considerable funds were invested in their organization. Only weather conditions could have put it, but at this time of year in the Krasnaya Polyana, where the main competitions of winter sports were held, there are always low temperatures and a dense layer of snow. Nevertheless, if you remember, it was in those days in the region that the rains unexpectedly went down, which almost spoiled the entire world sports festival. The whim of nature? Maybe. But the human factor can not be ruled out. To the same extent as in the case of the forty-degree frosts that were established that year in Chicago. And if we assume that sending warm weather to Sochi, the Americans received unprecedented colds on their territory “in tune”.

“There is no official climate weapon,” says military expert, meteorologist Alexander Minakov. – Attempts to influence, but rather it is still a study, the ionosphere has been underway since the beginning of the 1960s and they have not ceased to this day. However, the same Americans practically turned off these developments because of their cost and the lack of concrete results. The fact is that you can not manage the weather, it can only be corrected. The most famous method for us is to interrupt the rains during the holidays, which has already been applied repeatedly. Americans also used these methods, only with the opposite result, during the Vietnam War, when they performed the operation Popeye. Then their transport planes sprayed silver iodide in the sky, which caused rainfall three times higher than normal, as a result of which roads were washed out, communications were destroyed. But the effect was dubious and short-lived.

There are also positive examples of the impact on the climate, as, for example, it was after the accident at the Chernobyl nuclear power plant, when Soviet geo-engineers prevented an ecological catastrophe. Radioactive dust was tied up with special compounds so that it would not be carried by the wind, so that the dust would not wash off into the rivers, in the sky an anti-rain barrier was created. ”

By the way, the ancestor of domestic climate weapons can be called … Stalin. In his youth, Joseph Dzhugashvili for a short time worked at the meteorological station as an observer. And it was on his initiative already during the Great Patriotic War that automatic probes were thrown in the rear of the enemy, which transmitted information about weather conditions, which made it possible to correct the actions of aviation. By the way, in those years the Hydrometeorological Service of the USSR was transferred to the Red Army and on July 15, 1941 the Main Directorate of the Hydrometeorological Service of the People’s Commissariat of Defense was established, as well as the Central Weather Institute, which directly submitted to the General Staff. Hydrometeorological departments were set up in the headquarters of the armies and fronts, many partisan detachments in the territory of Belarus and Ukraine were meteorologists, information from which was constantly transferred to the “Big Land”.

By the way, and the famous parade on November 7, 1941 took place largely due to the fact that a forecast was received about inclement weather, which hinders the activity of enemy aircraft. Used by Stalin in the defense of the capital and such a natural factor as artificial flood – ice on the Moscow channel was undermined, which made it difficult to advance German tanks.

Attempts to create climate weapons were held repeatedly – both in the US and in Russia (the USSR). Americans have chosen Alaska testing grounds for testing in the ionosphere, where they use HAARP and HIPAS systems and another similar one in Puerto Rico. In Europe, Norway, there are two complexes for ionosphere research (as officially stated), which are used in the interests of the United States. There is a similar one in the territory of Peru. It is known from open sources that in practically disbanded form there are complexes of active influence in Nizhny Novgorod (Sura), in Tomsk, on the basis of the ionospheric station of the Siberian Physico-Technical Institute, in the Kharkov region (Uran-1) and Tajikistan (” Horizon”). Information about them is not widely distributed, but strategic meteorological work in the form of research is conducted.

“The impact on the nature of the Earth is a rather dangerous game that can lead to serious consequences, including for its organizer,” Alexander Minakov said. “Moreover, there are no specific, documented results from the thermal reheating of the atmosphere that was used by these stations. There is more mythology, which is trying to explain the natural disasters. Most likely, such studies use a more practical option, applicable to the missile defense system, which both the US and Russia are concerned about. After all, fluctuations in the ionosphere can completely paralyze the control of ballistic missiles, knock them off course. Another thing is that under the influence can get both strangers and their missiles, and at the same time and all the spacecraft. Similarly, unpredictable places on the planet, where there will be an earthquake or tsunami, caused by human intervention. “