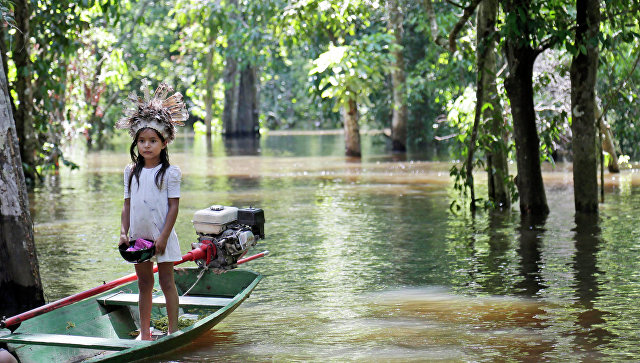 The frequency of floods in the Amazon basin and their strength has increased about five times in recent years due to global warming and shifts in the nature of currents and winds in the Atlantic, say scientists in an article published in the journal Science Advances.

“In the past, we were attracted by stories related to the onset of severe droughts in the region, but now we have found evidence that the frequency of the most powerful floods has increased dramatically, in fact, it can be said that extreme floods occurred in the Amazon every summer, beginning in 2009 and ending with 2015, “- said Jonathan Barichivich (Jonathan Barichivich) from the University of Leeds (United Kingdom).

Two years and a year ago, Russia, the United States, England and a number of other countries were amazed by a number of extremely powerful weather events, such as the most intense rains and extreme heat in the summer in Russia and South Asia, floods during autumn and winter in England and the USA.

The increase in various floods, periods of extreme heat and other unusual weather events in recent years makes many scientists wonder whether they are related to climate change and those changes in the currents at sea, the movement of winds in the air and water flows on the earth, temperatures.

Today, scientists connect many of these phenomena with the restructuring in the nature of the work of the El Niño climate phenomenon, the nature of the movement of the waters of the North Atlantic Current and many other important “conductors” of weather and climate on Earth.

Barichevic and his colleagues discovered another example of the impact of global warming on the frequency of various disasters, analyzing the statistics on the water level in the Rio Negro river, one of the largest tributaries of the Amazon, which was assembled by the port services of the Brazilian city of Manaus since 1903.

This city, as noted by scientists, is near the point of the confluence of the Rio Negro into the Amazon, which allows us to use data on the water level in its vicinity for observations of the condition of the two largest rivers in the center of South America.

By combining Manaus’ chronicles with satellite imagery and similar measurements in the narrowest part of the Amazon’s upper reaches, scientists were able to reconstruct the picture of how floods and floods often occurred on the territory of its basin in the last hundred years.

These observations revealed an alarming trend – the frequency of development of both the most powerful floods and prolonged and very serious droughts has significantly increased in the last 50 years, since 1970. In total, the frequency of the development of the most powerful floods has increased approximately five-fold, and they began to occur both in the lower reaches and in the upper Amazon.

The reason for the onset of the “flood era,” as the scientists note, was that global warming accelerated and intensified the work of the so-called “Walker cells” – the wind systems linking the cold waters of the Pacific and the warm waters of the Atlantic. Their acceleration, in turn, was due to the warming of the Atlantic Ocean, activation of El Niño and shifts in the character of wind movement in the southern hemisphere.

As scientists suppose, in the future the number of floods will grow even more, as the water temperatures in the Atlantic will continue to grow. On the other hand, if the Pacific Ocean becomes warmer and El Niño changes its “sign,” then the frequency of floods will decrease, but it will remain very high, Baricicic and his colleagues conclude.