Contrails from airplanes affect the climate 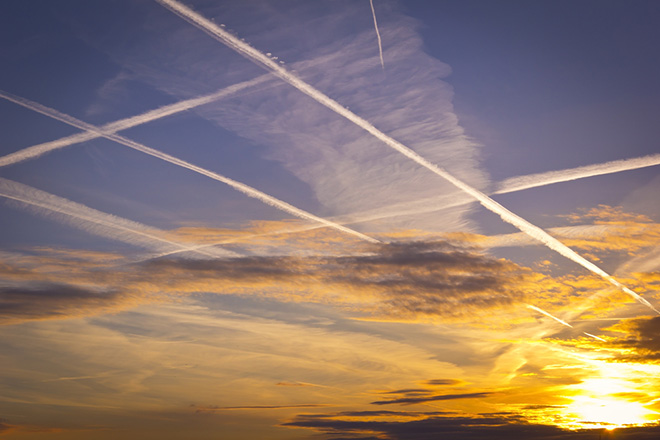 Clouds have a warming or cooling effect on climate depending on their density and height. The artificially created clouds are called condensation trails and appear on the sky due to emissions from aircraft. If the sky is cloudless, contrails have on climate minimal impact. But what happens when the sky of cloud?

A new study from researchers Hertfordshire University (UK) and Stockholm University (Sweden) showed that when contrails are formed in the existing high clouds, increasing the reflectivity of clouds, i.e. the ability to reflect light. The researchers hope that the discovery will help to learn more about the impact of aviation on climate.

“Normal contrails are strips that you sometimes see after overflying aircraft. Most often, these contrails disappear quite quickly. In other cases, they remain in the sky for some time and even spread, sometimes significantly. Many studies have sought to understand how contrails are formed and what kind of climate impact. Figure out how to affect the climate of the planes flying through the already existing in the atmosphere, clouds, and it was quite difficult,” says Kevin noone of Stockholm University.

“Although contrails and their impact on the climate are studied for a long time, we until recently did not know what was going on when the tracks are formed in already existing clouds. For such studies traditionally used photosensitive matrix, and they can’t see what is happening inside the clouds. Overcoming this barrier immediately led to a new discovery,” adds Matthias Tesche from Hertfordshire University.

The researchers used systems flight tracking and satellites equipped with sensitive laser to detect small changes in the optical density of the cloud, for example, the degree at which the cloud prevents light to pass through it. When scientists studied the corridor, aerodynamic flight from Honolulu to Los Angeles, Seattle and San Francisco, they found a significant increase in optical density of the cloud near the plane traces in comparison with remote from traces of clouds. In other words, clouds within the corridor of the flight was more light reflecting or bright.