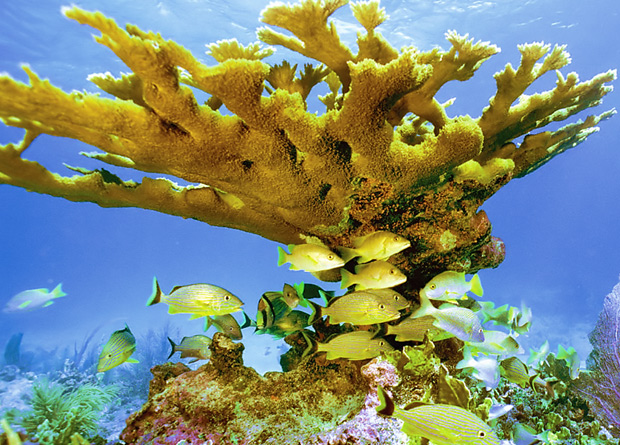 Coral reefs did not begin to disappear at all in the last 30-40 years against the backdrop of ongoing climate change, but in the 50s of the last century. Scientists came to this conclusion after studying the long-term dynamics of the Acropora palmata and Acropora cervicornis coral populations on the islands and in the mainland of the Caribbean coast. The possible causes of such events, the researchers called excessive fishing and the entry of agricultural fertilizers into the ocean with surface runoff. The results of the study are published in the journal Science Advances.

The disappearance of coral reefs is one of the main environmental problems of the 21st century. These unique communities are highly productive and provide biodiversity of oceanic ecosystems, but at the same time they are characterized by strict environmental requirements and are sensitive to their changes. It is believed that the global threat to corals came with rising air temperatures and acidification of ocean waters with excess carbon dioxide, but any pollution of the environment — even the use of sunscreens on beaches — is dangerous for these communities. Since the beginning of its environmental monitoring in the late 1970s, the living cover of reef-forming corals of the Caribbean has already decreased by 50 percent.

Scientists led by Katie L. Cramer from Arizona State University have studied the dynamics of the Acropora palmata and Acropora cervicornis coral populations in the Caribbean over the period from the end of the Pleistocene (about 125 thousand years ago) to our time (2011) to reveal the critical point of anthropogenic influence on these communities and compare it with crises of past geological eras.

The authors of the study studied the ratios of the ratio and age of dead and live weight, the dominance and abundance of species, as well as the population structure of Acropora palmata from 629 test sites and similar indicators for Acropora cervicornis 2468 sites. To do this, they took advantage of the observations of the World Coral Reef Monitoring Network (GCRMN) and older government reports and peer-reviewed studies conducted in more than 30 countries in the Greater and Lesser Antilles, the Gulf of Mexico, and mainland Central and South America. 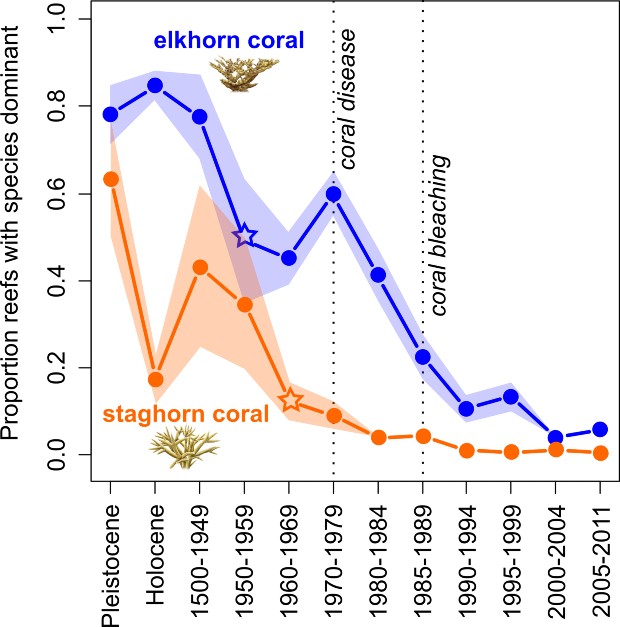 The history of the existence of Acropora palmata (blue color) and Acropora cervicornis (orange color) in conditions of mutual competition from the Pleistocene era to the present day. In the 1970s, coral diseases started, which in the second half of the 1980s were aggravated by their discoloration.

Despite the fact that the 1980s were called the beginning of extinction of coral, the authors of the study concluded that problems were observed several decades earlier: in the 1950s, the population of Acropora palmata decreased, and by the beginning of the 1960s, Acropora had similar consequences. cervicornis. 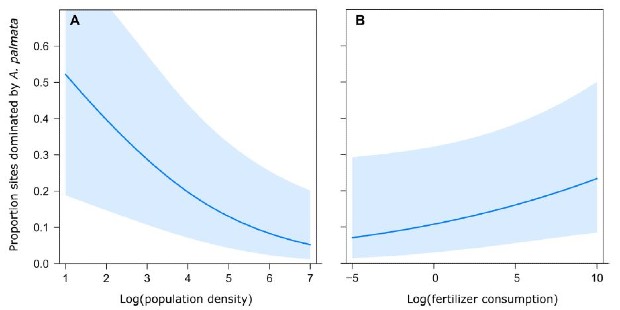 Correlation analysis showed significant positive correlations between a decrease in the number of corals and the amount of fertilizer in water, an increase in the human population, hurricanes, and an increase in temperature (p <0.001). Scientists have suggested that the living conditions of corals began to change with the growth of the population in the region, which led to the depletion of fishing zones and the intensification of agriculture. Surface runoff carried fertilizers from the fields directly into the ocean, which led to disastrous consequences for coral reefs. They also noted that the decline in coral in the 1950s coincided with the start of the use of highly toxic pesticides in agriculture. Fortunately, some studies indicate that corals are gradually adapting to rising water temperatures and can survive in changing environmental conditions.