Crimea was struck by a powerful storm 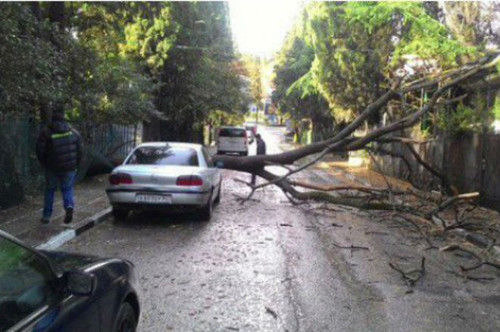 Second day in a row on the Crimean Peninsula raging storm — almost the whole day raging snow and rain. Wind storm knocks trees, and the inhabitants of Yalta wonder “white feathers” this time of year.

The wind was so strong that it knocked down trees in several cities of the Crimea. About any damage caused by bad weather reported by the residents of Sevastopol and Yalta. The snow and sometimes icy roads caused accidents and congestion. From-for a squally wind on the sea rose a great storm that stopped the work of Kerch ferry crossing and caused the closure of roads in Sevastopol.

Due to difficult weather conditions from the southern slope of mount AI-Petri in the direction of Yalta at the 50th km of the highway Yalta Bakhchisarai hit by a snow avalanche. According to the information at this time, no injuries, threat to people, but the road was blocked. The volume of the snow mass of the avalanche was at least 100 cubic meters.