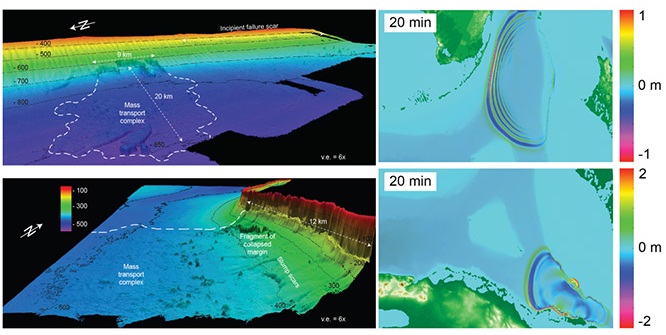 Scientists conducted a study and its results reported that Cuba and the American state of Florida, threatening a devastating tsunami, which caused a major landslide in the area of Grand Bahama.

Scientists from the University of Miami, found that giant submarine landslides in this area has caused tsunami in the past and is able to provoke such a catastrophe in the future.

Jara Schnyder, is a leading author of the research team says that a small distance from the toe of the landslide to the shores of Florida and Cuba will provoke a tsunami wave with a height of 5 meters and it will fall to Florida in just 20 minutes.

In the heart of Grand Bahama, there are several dangerous areas. Particularly dangerous section has a length of 100 kilometers and it can collapse as a result of seismic activity in Cuba.

Gregor Eberli, a Professor from the University of Miami warns that the population should be aware of the dangers. According to him it is important to understand that tsunamis do not always occur after powerful earthquakes, sometimes small tremors, which will cause a giant undersea landslide which will create a destructive tsunami wave.