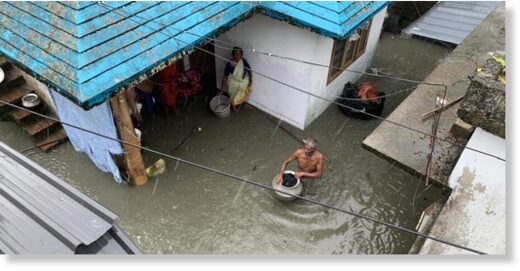 As Cyclone Tauktae is expected to intensify into a major cyclonic storm, the Meteorological Department of India declared a red alert in nine districts of Kerala on Saturday.

More than 20 cm of rain can fall in 24 hours in these areas. Meanwhile, the sea continues to be very rough and huge tidal waves are hitting coastal villages, forcing hundreds of families to leave their homes. Stormy weather is expected to continue until Sunday evening.

River levels are rising and the Central Water Commission has issued a flood warning on the banks of the Manimala and Achankovil rivers.

Huge waves brought down a two-storey house at Musodi Beach in Mangalpadi panchayat. Five houses in the area are at risk of collapse and their occupants have been evacuated.

Raja, 50, a farmer from Wattawada panchayat in Idukki district, died of cardiac arrest as his family could not transport him to the hospital due to bad weather.

Heavy rain and high winds had hit the area since Friday evening, uprooting trees and ripping down power lines. Raja could not be taken to the hospital because fallen trees blocked the road.

In Kuttanad, the rice bowl of Kerala, high floodwaters caused fences in the rice fields to collapse. The gates of the Malankara, Lower Periyar, Kallarkutti, Bhutatan Kettu and Arkuvikkara dams were opened after a sharp increase in the flow of water.

The Coast Guard rescued three fishermen caught in the rough sea off the Thalassery coast.