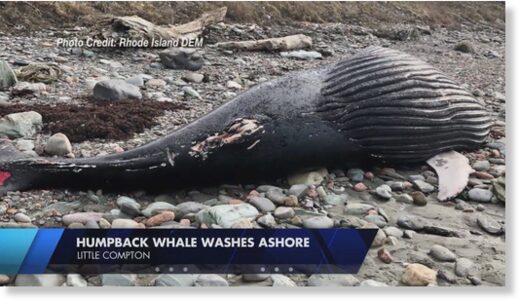 A property owner in Little Compton was greeted with an unpleasant surprise Saturday: a dead humpback whale had washed ashore.

It’s beached near Church Cove in Little Compton, on private property, and that’s making it a little more complicated for officials to address the situation.

Beached whales are not uncommon in our area, but this time around the whale is young and doesn’t immediately appear to have been injured.

The Rhode Island DEM is working with the mystic aquarium to coordinate a necropsy to determine how the whale died.

Healey says, “We really only know a fraction of what’s going on in the oceans. So, as sad as an event like this is, a pretty well preserved whale that’s washed ashore really is kind of a gift to science.”

After the necropsy, they plan to leave the whale right where it is to decompose naturally over time, since its location makes burying or moving the whale extremely difficult.

Healey says, “By late spring-ish, it would likely be just bones.”