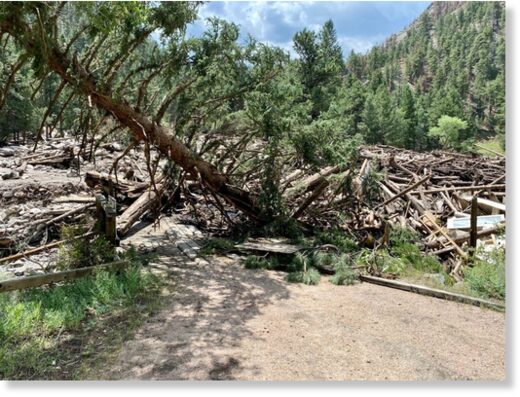 Severe flooding has hit parts of Colorado and New Mexico, USA over the past few days. Officials say at least 3 people have been killed and 3 more are missing.

Flooding and landslides have occurred in northern Colorado after heavy rain fell on July 20, 2021 in an area of burned woodlands. An evacuation was declared in the area around the town of Rustic, Larimer County.

The landslide sent large amounts of debris into Poudre Canyon in Larimer County. Three people were swept away by the landslide. The Larimer County Sheriff’s Office said the body of one of the victims has been found, but two people are still missing. At least five homes were destroyed and roads were damaged by the flooding. The search is continuing, Larimer County sheriff’s office said, and emergency crews will be searching on foot and using drones.

The storm brought heavy rains to Albuquerque, New Mexico, July 20. Three people were reported missing after they were blown into an arroyo (waterway) in the northeast corner of the city. Firefighters have since recovered the bodies of two of the victims. The search for the third person continues.

NWS Albuquerque reported that radar data showed that more than 1.66 inches / 42.16 mm of rain fell in one hour on July 20 in the El Dorado area northeast of Albuquerque.