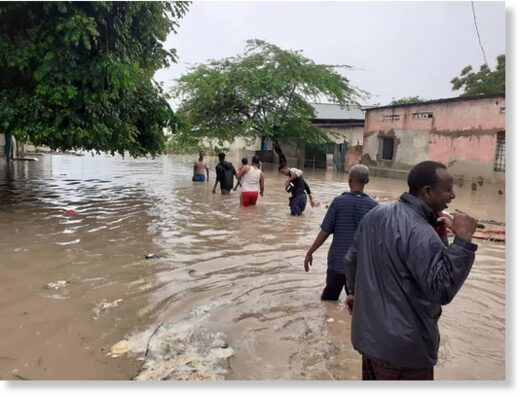 The Somali Red Crescent Society (SRCS) reports that at least 9 children died after heavy rains caused a house to collapse in Mogadishu, the Somali capital.

Heavy rains hit the city on May 07, 2021, causing severe flash flooding that caused buildings to collapse in the Wadajir district.

Abdulqadir Afi, Director of Organizational Development and Communications for the Somali Red Crescent Society, said via social media, “Sadly, 9 children taken to the hospital after a house collapsed in Mogadishu died from their injuries. Rescue efforts are still ongoing, and ambulances from our Somali center continue to treat the injured.” Heavy rains have caused flash floods and destruction of structures in the area.”

Local media reported further deaths after heavy rains damaged temporary shelters for internally displaced persons (IDPs) in the Garasbalay area on the outskirts of the city on May 08, 2021.

Meanwhile, hundreds of people were displaced from their homes and crops destroyed after flooding caused by the Shabelle River overflow in Jowhar district. Jowhar is reportedly virtually isolated after the Mogadishu-Jowhar line was cut.

Meanwhile, the UN Food and Agriculture Organization (FAO) warned that at least 150,000 people are at risk of impending floods. The FAO said the observed level of the Shabelle River has continued to rise alarmingly over the past two weeks following “unprecedented excessive rains in the upper Ethiopian highlands,” which have been particularly intense in the past few days.