Death Valley records the highest temperature on Earth since 1931 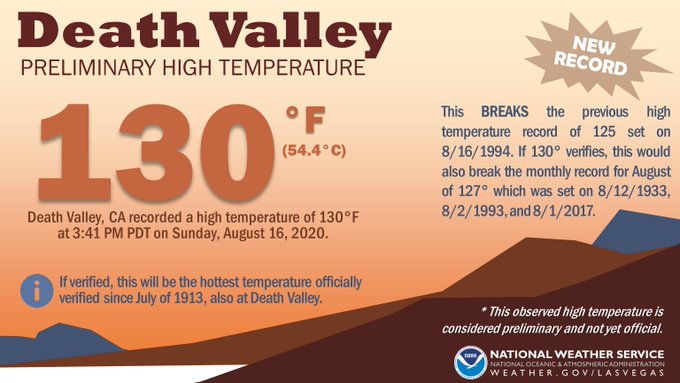 Temperatures in California’s Death Valley have reached 130 degrees Fahrenheit (54.4 degrees Celsius). This is one of the highest temperatures ever recorded on Earth, the Guardian notes. The situation is exacerbated by the massive fires gathering strength in California.

Data from the National Weather Service showed that the weather station in Furnes Creek recorded a temperature of 130 degrees Fahrenheit at 3:41 pm PT last Sunday. At the same time, the air humidity was 7 percent with gusts of wind up to 9.6 kilometers per hour. These are preliminary data to be studied by the National Center for Environmental Information and the World Meteorological Organization. If confirmed, this result will be the third highest temperature ever recorded on the planet.

The temperature record was also recorded on July 10, 1913, also in Furnes Creek, a small community of just over 30 that is home to Death Valley National Park. Then the air warmed up to 56.7 degrees Celsius (134 degrees Fahrenheit). However, some experts question the accuracy of the old temperature records. The 1913 readings in Death Valley were recognized as the hottest on the planet after experts from the World Meteorological Organization in 2013 did not recognize the temperature of 58 degrees Celsius, allegedly recorded in Libya in September 1922. Experts concluded that the readings in Libya probably cannot be considered correct due to human error, misused thermometer and inconsistency with other temperatures recorded at that time in the region. Christopher Burt, of the private US meteorological service, who initiated an investigation into the Libya recordings, also questioned the legitimacy of the 1913 Death Valley temperature readings, stating that they were “essentially meteorologically impossible.”

The highest temperatures ever recorded on Earth, according to BNO News: