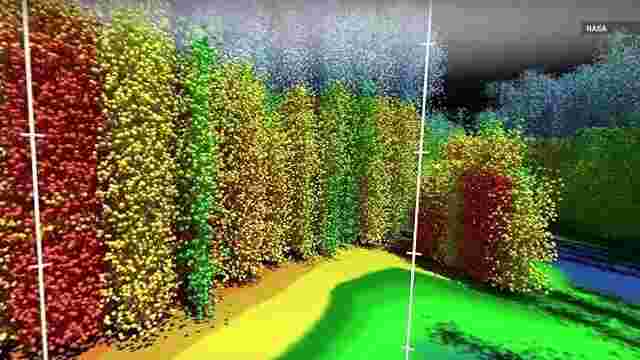 Two days before Hurricane Maria in September 2017 devastated Puerto Rico, NASA / JAXA’s Global Precipitation Measurement Core Observatory satellite received a three-dimensional image of its internal development. The presented 3D visualization shows the processes inside the hurricane, which contributed to its strengthening from the first to the fifth category within 24 hours.

The GPM satellite has an advanced radar that measures both liquid and frozen water. Bright colored dots show precipitation areas where green and yellow are low, and red and purple are high. At the top of the hurricane, where the temperature is colder, light blue and violet dots indicate light and heavy frozen precipitation. Colored areas under the dots show how many raindrops fall on the surface.

Gradually, the points are converted into numbers, which reflect the rate of precipitation in millimeters per hour. It ranges from less than 0.5 mm / h to more than 150 mm / h. Then this parameter is shown in the form of ellipsoids: high levels of precipitation – wide red or purple, low – spherical green or yellow, levels of snowfall – from purple to blue. The satellite can also determine the size of small particles of precipitation and their distribution throughout the cyclone. By the end of the video large drops are depicted in a dark blue color, while small ones are painted in light blue and white.

The size of the droplets and the rate of precipitation are key parameters for understanding the intensity of hurricanes. Factors such as temperature, humidity, wind speed and clouds affect particle size, which in turn affects precipitation and cyclone development. Modern satellite measurements are crucial for predicting how much a hurricane can intensify and where to go.