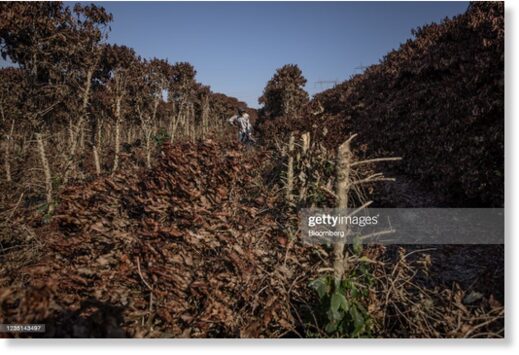 Coffee prices have remained roughly flat lately, but not for long because of a major disruption in the global coffee supply. Brazil, the world’s largest coffee exporter, has been hit by unprecedented extreme weather conditions that have severely damaged the coffee crop – which will eventually lead to higher coffee prices around the world.

At the end of July, unprecedented low temperatures hit southern Brazil. Snow covered many hillsides. In coffee-growing regions, fields were covered with frost. In a video circulated on the Internet, a farm worker examines coffee plants affected by frost in the state of Minas Gerais. The leaves are dead and brown. The coffee beans are black and covered in ice.

“We lost 80 percent of our coffee crop in this area,” said coffee farmer Flavio Figueiredo. “In this region, I think 30 to 40 percent of the coffee plants have been damaged.”

Coffee growers estimate that nearly half a million acres of coffee crops were affected by the frost. It was Brazil’s worst frost in 27 years.

“This is a really difficult year,” said Celirio Inácio, head of the Brazilian Coffee Growers Association. “We haven’t seen anything like this in a long time.”

Brazil’s coffee crops have suffered more than just frosts. They also suffered from a drought earlier this year.

“We have to think about it. It’s really in front of our eyes, it can’t be ignored.”

“The two leading coffee-producing countries are Vietnam and Brazil, and if one of those two countries has any weather or supply problems, it will affect the whole world market. We saw that in the ’90s and we’re seeing it now.”

In July, the price in the coffee market jumped to a seven-year high. The price of coffee futures is now about $1.93 a pound, up 50 percent from the beginning of the year.

Ferreira-Mathews says you probably won’t see an increase in prices at your local coffee shop just yet. The coffee currently in circulation was picked when prices were low. But it won’t stay that way for long.

“I do think we’re going to see a very significant change in prices in coffee shops soon because of the pandemic and supply shortages from Brazil.”