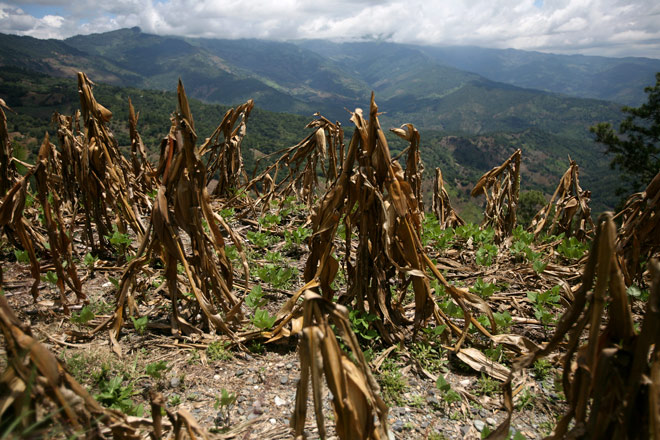 Single mother Sonia, Elisabeth Cordero’s forced to feed a family with one corn. The harvest this year is very poor quality. In the past he would have gone for animal feed. And now many of the inhabitants have no other choice: the drought, which continues in 2012, destroying plants and threatening hunger.

[Sonja Elisabeth Cordero, resident of a village in the Department of Jalapa]:
“It hurts me to see that my daughter is unable to eat normally. Drink from maize grains Athol supports it, but not as if she was eating tortillas and everything else. It’s hard when I can’t provide her with food.”

In the same plight – even hundreds of thousands of Guatemalans. A particularly difficult situation in the so-called “dry corridor” in the South-East of the country. There since 2012, had especially little rainfall. Experts say that worsened the situation of increased climatic phenomenon El niño.

Mario Touchette, the representative of Guatemala to the world food program says three million Guatemalans do not have enough food. Of them 900 thousand residents in need of immediate humanitarian support. While humanitarian organizations together with the government can help only half due to limited resources.

[Mario Touchette, the representative of Guatemala WFP]:
“A huge number of families not receiving support and continues to be exposed to El niño and high temperatures. They lost their harvest in August 2015. And if, before August this year, they’re not gonna get a new one, will be in distress”.

The experts say that providing people with food will not solve the problem. They call on the government to develop a long-term programme to combat drought.

[Diego Recalde, FAO representative in Guatemala]:
“The emergence of the “dry corridor” due to climate change. And it will not disappear. We can’t respond under the old scheme. We must create long-term projects that will include the conservation of watersheds in mountainous countries such as Guatemala, but also in the neighboring districts and Honduras.”

Meanwhile, the family continues Sony to eat a corn. In August it is expected the new crop. However, if the rains do not go in the near future, to survive in these stocks will have until the end of the year.