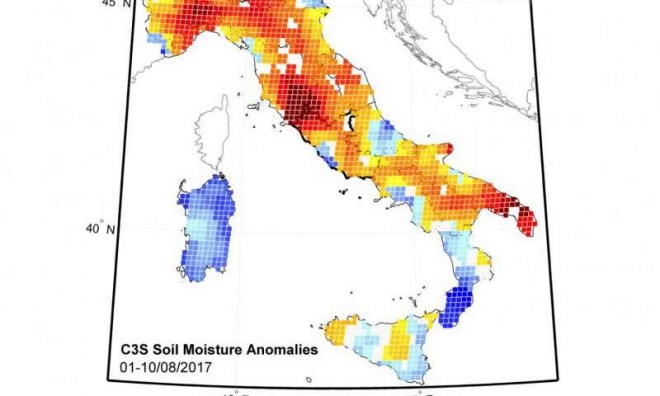 Anomalously low soil moisture prevails in central Italy. Scientists use satellite information to monitor the drought that swept the country.

Natural fires, scarcity of water and damage to agriculture by billions of euros are only part of the impact of the summer drought on Italy. News about the possible rationing of water consumption in Rome has already spread all over the world.
Local authorities work to mitigate the effects of drought, and scientists look up to the sky to get answers.

Satellite data show that the soil in southern Tuscany has been drier than usual since December 2016. A similar situation was observed in 2007 and 2012.
“In the first six months of 2017, less than half of the average rainfall in central Italy fell,” said Luca Broca from the Geohydrological Research Institute.

“The combination of low precipitation and high temperatures has led to drought, and we need a significant amount of rain to recover the water lost in the last 8 months.”

Italy is not the only country affected by the drought this summer: France and the countries of the Balkan Peninsula also experienced extreme heat and low precipitation. But central Italy surpasses the rest of Europe in an abnormally low level of soil moisture.

Information on soil moisture is collected by satellite radars measuring microwaves reflected from the surface of the Earth. The intensity of the signal depends on the volume of water in the soil. 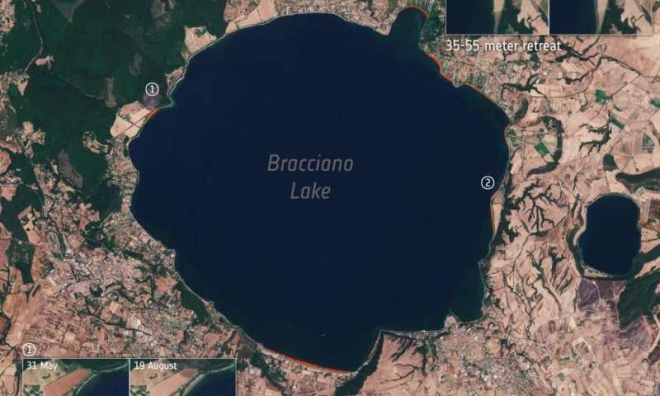 Other sensors on satellites can observe the effect of drought on the water level in the lakes.

Approximately 30 km north-west of Rome, Bracciano Lake is experiencing a significant loss of water. The retreating coastline is so noticeable that it was seen by satellites, which means a reduced supply of water for Rome.