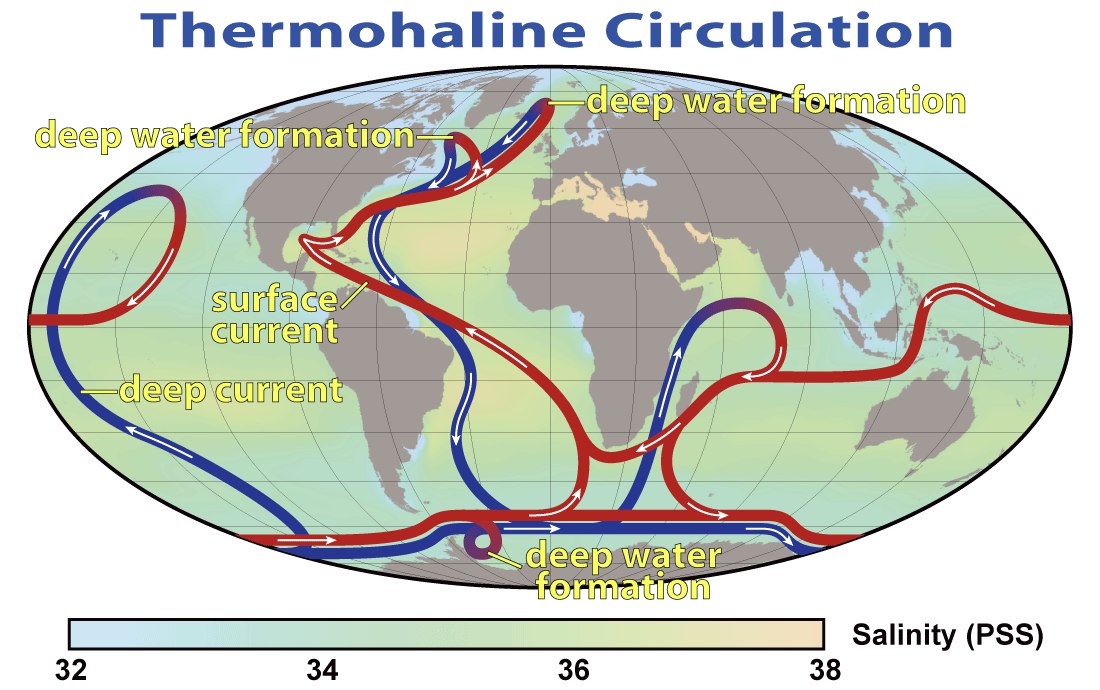 Intense climate change in the future could affect the world not as current models predict. If the concentration of carbon dioxide in the atmosphere doubled, an important ocean current which affects climate and weather patterns around the world, will disappear. And then weather the model of the future will be very different from today’s forecasts.

The meridional thermohaline circulation of the Atlantic describe as a huge oceanic conveyor belt. This system of water currents that brings warm water from the Atlantic to the Arctic, creating a mild climate in Western Europe.

In the North Atlantic ocean surface water cools and sinks to the bottom of the ocean, and another carries the cold water back South. This process — a large part of the thermohaline system of currents that circulate around the world from pole to pole. But some scientists believe that the meridional thermohaline circulation of the Atlantic ocean is not accurately represented in current climate models. They argue that many models describe the course as more stable than it really is.

Recent research suggests that the circulation is weakening, and this affects climate forecasts. Wei Liu from Yale University and his colleagues from the University of California at San Diego and the University of Wisconsin in Madison took the conventional climate model and “loosened” her in the meridional thermohaline circulation of the Atlantic ocean. Next, the researchers conducted an experiment to see how the fix will affect projections for future climate change. They immediately doubled the concentration of carbon dioxide relative to the current level in the corrected and uncorrected models, and then enabled both models to develop hundreds of simulated years.

The difference was striking. In the uncorrected climate model meridional thermohaline circulation of the Atlantic ocean, weakened for a while, but eventually restored. In the corrected model, the circulation weakens and after 300 years disappears. Climate effects in the corrected model is also mind-boggling. Without the usual transport of warm water into the Arctic, North Atlantic, including the UK, Iceland and North West Europe, waiting for the cold.

In the Arctic will begin to grow sea ice.
Since the meridional thermohaline circulation of the Atlantic ocean — a large part of the global conveyor system is that includes warm and cold currents between the equator and both poles, the model predicts dramatic climate changes in other parts of the world. Without reverse movement of cold waters to the South much warmer. The result will be the polarization of the precipitation over the Americas. In the North-East of Brazil rains will be more, and in Central America — less. The model also predicts a strong decline of sea ice in Antarctica.

Thermohaline circulation large — scale ocean circulation that is created due to the differential water density, formed as a result of heterogeneity of distribution of temperature and salinity in the ocean. The adjective thermohaline consists of two parts: the “thermo” temperature, “halin” — salinity.