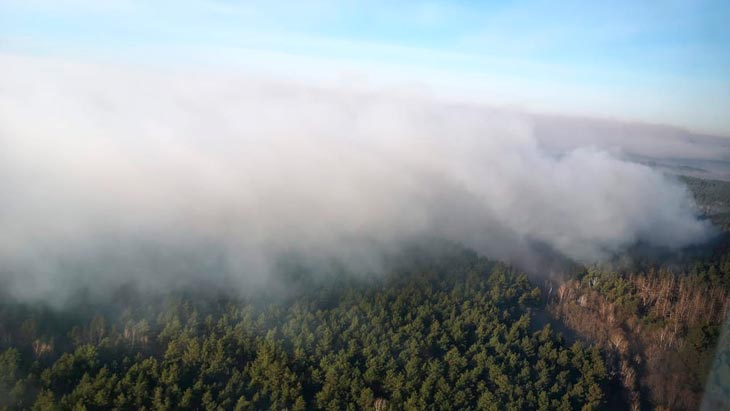 The international movement Doctors of the World for the Prevention of Nuclear War (IPPNW) issued a statement stating that monitoring data indicate that there are already radioactive clouds in the sky over Ukraine, and when the wind direction changes, these clouds can also cover Europe.

IPPNW Co-Chair Alex Rosen said smoke clouds from Ukraine had already reached some regions of Europe where an elevated level of cesium-137 radioactive nuclide was recorded.

In turn, the Russian Roshydromet reports that radiation monitoring posts operating as part of the federal service monitoring system have not yet recorded changes in the radiation situation in Russia.

The State Emergency Service of Ukraine reports that in the Chernobyl exclusion zone, fire extinguishing continues in the territory of Korogodsky, Lubyansky, Parishivsky, Dityatkovsky and Denisovetsky forestries. The main efforts are aimed at the localization of 3 cells (the villages of Rassokha, Krivaya Gora and Rudki – Buryakovka) decay of hemp, wood residues and two peat bogs in the cells passed by the fire. There are no threats to the Shelter, the repository of radiation waste, or other critical facilities in the exclusion zone.

The radiation background in the city of Kiev and the Kiev region is within normal limits and does not exceed natural background values ​​(Kiev – 0.012 mR / h, Kiev region – within 0.011 mR / h with an acceptable background of 0.05 mR / h).