Dust from the Sahara spreading in the atmosphere 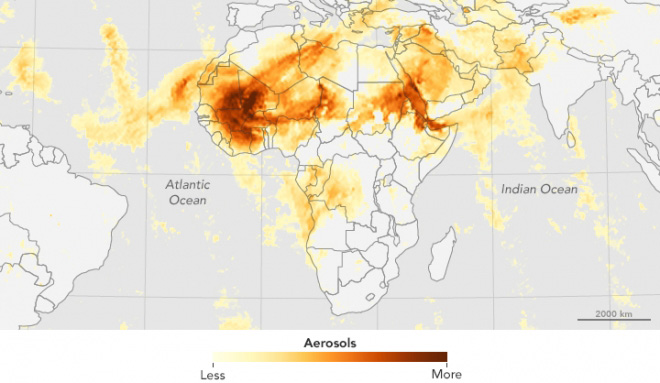 In mid-June 2016 the winds have lifted the thick clouds of dust from the deserts of North Africa high in the air. When dust gets into the wind at high altitudes, it can be moved long distances, which in turn can cause far-reaching consequences.

For example, dust from Africa participated in the formation of beaches in the Caribbean and even got into the soil of the Amazon. It also affects air quality in Europe and in North and South America. Moreover, the dust affects the hurricanes and the deterioration of coral reefs.

The map above shows the concentration of aerosols on June 19, 2016, the data were provided by the instrument Ozone Mapping Profiler Suite on the satellite Suomi-NPP. The high concentration shown in dark red, low — light yellow. The largest plume apparently extends from the Sahara in West Africa. When this map was made, the wind carried the plume of dust westward across the Atlantic ocean and the archipelago of Cape Verde. 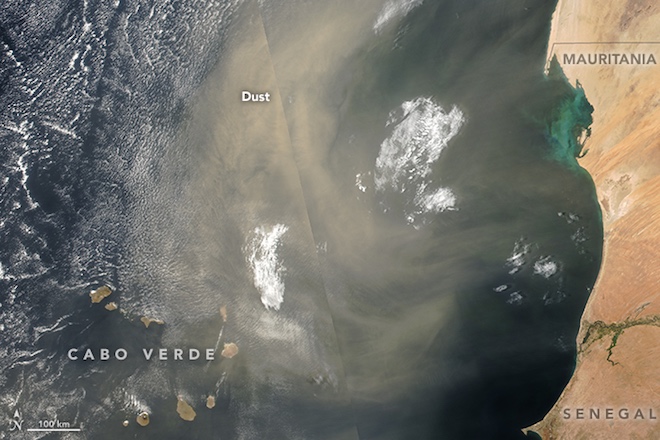 Photo of the plume can be seen on the second photograph, taken on June 19. It was obtained using the Visible Infrared Imaging Radiometer Suite on the satellite Suomi-NPP.