Dust storms in India led to deterioration of air quality 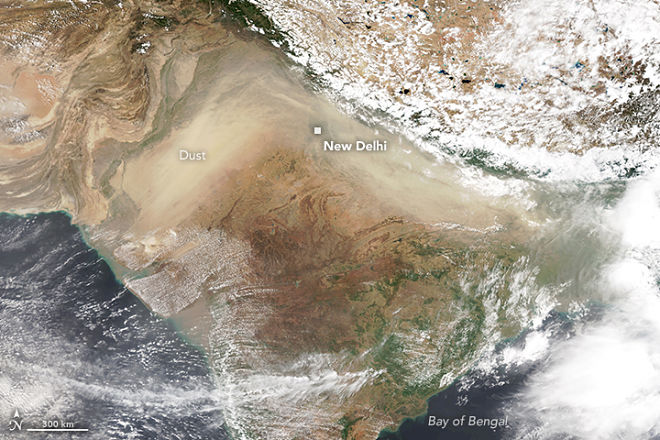 As the weather gets hotter and the winds stronger, dust storms begin to cover the whole of India. The most powerful dust storms usually occur just before the monsoon season. But this year the situation worsened.

Hiren Jetwa, who studies aerosols in conjunction with the NASA’s Goddard Space Flight Center Association for Space Exploration, noted that dust loads can be observed every year from April to June. This year the season was unusual in terms of increased intensity.

In May 2018, India experienced a period of extreme weather conditions, including severe dust storms and thunderstorms. A new surge of storms from June 12 to 15 over New Delhi led to severe pollution of the environment, resulting in residents suffering from polluted air.

A dust storm began in the western state of Rajasthan on June 12, 2018, when strong winds raised dust from the Tar desert. Over the next few days, dust traveled north and center of India. This image was obtained on June 14 with the help of the VIIRS instrument on the Suomi NPP satellite. The dust was trapped between the mountain ranges and can be seen in the image as an inverted v.

Jatwa expected the dust to continue to southeast toward the Bay of Bengal, but instead it remained concentrated over the northern plains for another day, as the southward dust was met by strong winds blowing northwest of the Bay of Bengal.

The air quality of New Delhi was the worst on June 15, 2018. The diagram below shows air quality (particulate matter and ground-level ozone) over New Delhi, according to the monitoring of the US embassy and consulate. Hazardous levels are classified with values ​​from 301 to 500. The air quality index in New Delhi on June 15 was about 518. Local authorities asked residents not to go to the streets, and sent fire brigades to spray water around the city.

Along with strong south-west winds that raise dust, one of the reasons for the intense dust storm is that the first monsoons in North India this year did not start on time. As a rule, rains help to remove dust, cleaning the air.