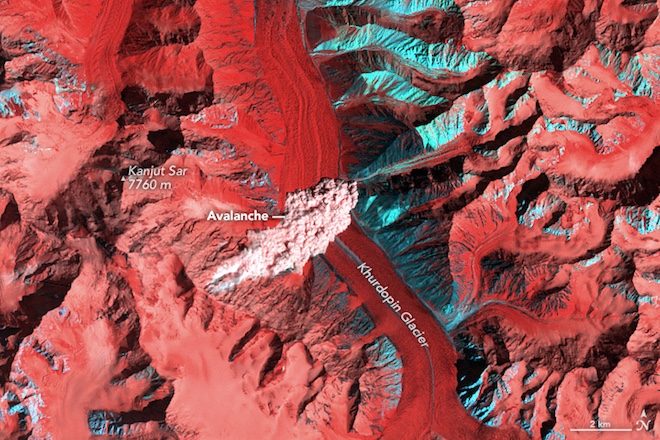 The so-called dust avalanches consist of thin scattered snow particles that behave like a rapidly moving cloud of dense gas. Large dust avalanches easily reach a speed of 130 km / h in a few seconds and usually do not last long.

By a lucky chance on April 17, 1996, the Landsat-5 satellite managed to take this picture in the false color of an avalanche, which slides along the steep slope of the Kanjut Range in the Karakoram mountain system in the north of Pakistan. The image combines infrared, red and green wavelengths to make it easier to distinguish the avalanche. Snow on the photo is red; Bare rocks and soil – turquoise. The shadows are black.

The source of the avalanche was at an altitude of 6.5 thousand meters. Snow slipped into the valley and covered 750 meters of the Kurdopin Glacier.

In Kurdopin there are clearly visible obstructions – a strip that passes through its center. This band is called the median moraine and periodically changes its shape, which makes the glacier “climb” every few decades. The rise of glaciers alternates with quiet periods, during which they store huge amounts of ice and snow. After a calm glacier usually begins to move forward.

Jacob Steiner from the University of Utrecht noticed an avalanche, exploring the history of the rise of Kurdopin. Based on satellite imagery, the researchers described the upsurge in the 1970s and 1990s. Steiner and his colleagues are tracking new, even faster rises that began in October 2016. Scientists are closely watching Kurdopin, as its ups can block the river Vidzherab and lead to dangerous floods downstream.

The height of Kanjut is 7760 meters. This mountain is 11th in height in Pakistan and 26 in the world. Although climbers do not often climb climbers, it is known for its avalanches.