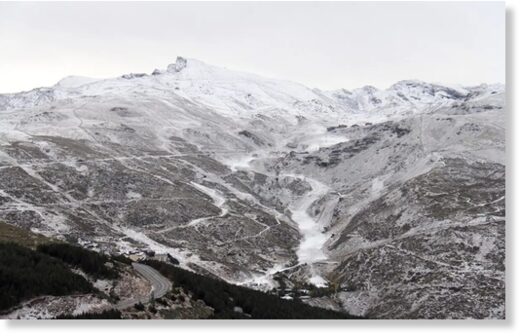 ﻿
A snowfall alert was issued Tuesday in ten Spanish regions as the country prepares to take the hit of the first winter storm of the season.

The storm, which began Monday, 10 days before the meteorological start of winter, is caused by “the arrival of a mass of cold air from high altitudes that has caused a sharp drop in temperature,” said Ruben del Campo, spokesman for Spain’s national meteorological agency Aemet. According to del Campo, this mass of cold air also led to the formation of a slow-moving storm system, officially known as an isolated upper-level depression (DANA), but better known in Spain as gota fría, or literally a cold blob.

On Tuesday, Aragon, Castilla-La Mancha, Castilla y León and La Rioja declared an “orange” level snowfall warning, which is the second highest in Aemet’s three-level warning system. Asturias, Cantabria, Catalonia, north of Madrid, Navarra and the Valencia region are on yellow alert, which is the lowest level.

In the last 24 hours, snow fell at increasingly lower altitudes, and on Monday night, snow was recorded at 800 meters in the northernmost part of the country. Traffic restrictions were imposed on nearly 750 kilometers of roads in 10 provinces, mostly in northern Spain, because of snow accumulation, according to Spain’s DTG traffic directorate.

Torrential rains, strong storms and winds were also forecast in some parts of Spain on Tuesday. Six regions – Aragon, Asturias, the Balearic Islands, Galicia, Catalonia and Valencia – have issued an alert due to heavy rainfall, with up to 40 millimeters per hour expected. Asturias, Catalonia and Galicia received warnings of strong waves up to five meters, and in Catalonia an alert was declared due to wind gusts up to 80 kilometers per hour. Catalonia, which has a red danger level due to precipitation, and the Valencia region also received storm warnings.

Windy weather is forecast to continue throughout the week, with a new storm hitting Spain on Thursday. The Canary Islands, off the coast of northwest Africa, will be mostly unaffected, although heavy rains are forecast from Thursday, especially in the western part of the archipelago.

According to Del Campo, Tuesday will be “the worst day of this winter episode.” On Wednesday, snow is expected to fall in the same regions, but with less intensity, and maximum temperatures will begin to rise. Torrential rains are also forecast to continue in Cantabria and eastern Catalonia. Another storm from the north is forecast to replace it on Thursday and heavy rains will continue through Friday. Snow at 700 meters is possible in the northern half of the Spanish mainland. Low temperatures are expected to continue into the weekend.

The storm also led to heavy rains in the province of Alicante, the Valencia region and southern Catalonia. The province of Tarragona received 67 millimeters of rain per hour on Monday, with 125 liters falling between midnight and 8 a.m. Tuesday. This made Monday the rainiest day of November since 1920. Heavy hail also hit the cities of Alicante and Elche.