Earth tornadoes above the Kilauea volcano 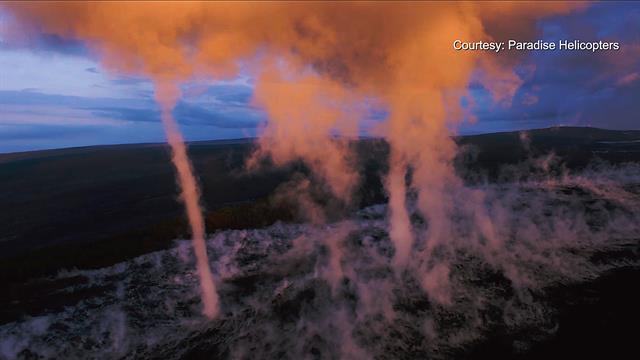 A rare phenomenon, known as a terrestrial tornado, was formed over the Hawaiian volcano Kilauea last Thursday. The photographer managed to capture an amazing phenomenon at a time when the flow of lava flowed from the giant.

Mick Culber flew over a volcano on a tourist helicopter and, having discovered a huge volume of lava, decided to go down to Pali – a very steep cliff on the volcano. “We wanted to go to Pali to see what was going on,” says Culber. “Then we noticed funnels or earth tornadoes, and it was delicious.”

“We saw that when a lot of lava flows into the water, this phenomenon is formed. The lava moves clockwise and sometimes spins into the funnel, “added Culber. “But we’ve never seen them above the ground before.”

The Kilauea volcano is the most active of the five volcanoes of the state, and it has been exploding since 1952. Since that moment, the volcano erupted 34 times, and its current activity has lasted since January 1983.