Earthquake in Italy has caused a shift in the landscape 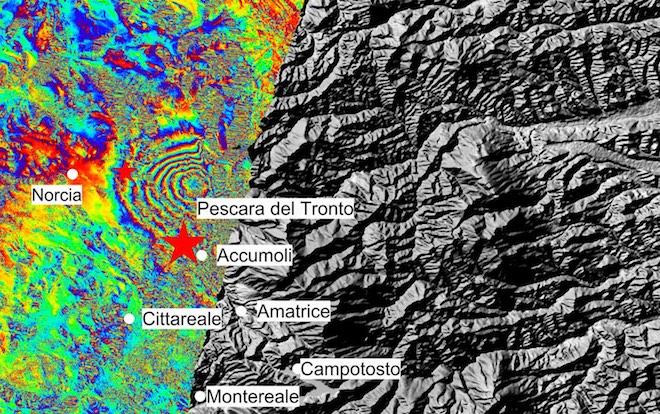 Data from two radar satellites space mission Sentinel-1 helped to obtain the interferogram, which showed the changes that occurred in the earthquake on August 24 in the center of Italy. Was captured radar data from 20 Aug (Sentinel-1B) and 26 August (Sentinel-1A).

7 interference fringes correspond to deformation of the surface is about 20 centimeters. Each band corresponds to about 2.8 cm displacement. Although spacecraft Sentinel-1 have the bandwidth scan 250 km, they are flying over Italy, on August 26 took place in such a way that did not include the entire area affected by the earthquake. New data will need to complete the picture.

European remote sensing satellites of the Earth Sentinel-1 was created with the purpose of global monitoring of environment and security, what helps radar synthetic aperture. Developed by Thales Alenia Space. Sentinel-1A was launched in April 2014, Sentinel-1B in April 2016. The satellite Sentinel-1A led repeated survey of the same areas every 12 days, however after the launch of its “twin Sentinel-1B, a period of re-shooting was reduced to 6 days.