Earthquake in Italy. There are destructions and victims. 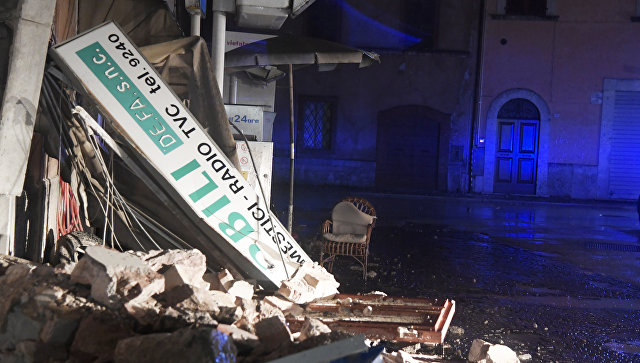 The tremor measuring 5,3-5,4 occurred on October 26 in the central part of Italy, reports national institute of geophysics and volcanology.

The strong tremor occurred on Wednesday evening in the central part of Italy, crust fluctuation was distinctly felt also by residents of Rome.

After it there was a new tremor measuring 6,2 in the central Italian region to Brand, report local TV channels. Crust fluctuations approximately within 20 seconds were clearly felt also in the center of Rome.

The earthquake led to serious destructions in a number of settlements near its epicenter in the province Macherata.

“At us many houses failed, even the facade of church is destroyed, the earth yawned. Our settlement it is finished” — told by phone news TV channel SkyTg24 of Giuliano Rinaldi, the mayor of the town of Ussita which was in close proximity to earthquake epicenter.

The similar statement was made to Ansa news agency by the mayor of Serravalle-del-Kyenti which compared the occurred earthquake to bombing.

“We saw only a huge cloud of dust in the center, but is still unclear that is destroyed. We see it already tomorrow morning” — told Gabriela Santamariyanova. Nevertheless, the mayor is sure that there are no victims among his fellow countrymen as after an earthquake on August 24, all inhabitants were evacuated from the ancient downtown.

Today it became known that as a result an earthquake Eight residents of Fabriano (area to Brand) got slight injuries and contusions, and also the Child whose age isn’t specified got serious wounds.