Earthquake of magnitude 4.6 on the Kilauea volcano 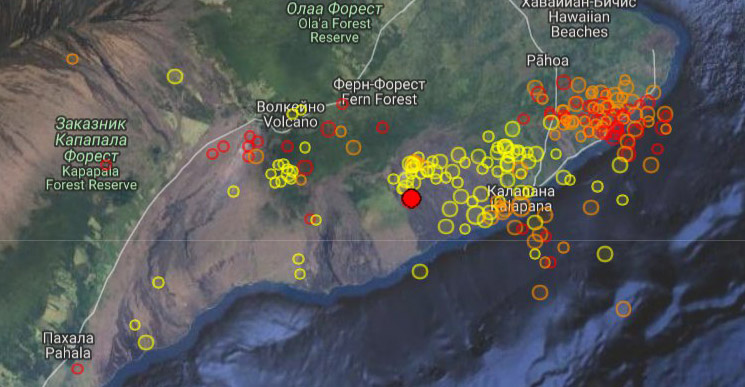 An earthquake of magnitude 4.6 occurred in the eastern rift zone of the Kilauea volcano. The hearth lay at a depth of 6 km. The epicenter was 7 km from the Volkaino settlement and less than 40 km from the city of Hilo.

Recall that local authorities warned residents of the nearest settlements about a possible evacuation due to increased seismic activity over the past few days.

27 April; the level of lava rose periodically in the Halemaumau crater. After the largest flow, the 2/3 crater was filled with lava. From 6:15 to 10:30 pm (pm) local time.

April 30; A sharp rise in the level of lava. Early in the morning, the level was 15 meters below the upper boundary of the crater.

1st of May; On the afternoon of April 30, seismic activity began to grow along the Eastern Rift Zone. Part of the crater began to collapse (as a result, late May 02 collapsed). Over 24 hours were recorded more than 300 tremors.

A new crack about 1 km long was formed in the West (above the Rift Zone) near the Pu’u ‘Ō’ко cone. A small amount of lava flowed from the crack.

May 2; Cracks appeared on the roads near the village of Leilani Estates. At present they are rather small. Outgoing heat or vapor was not observed. Cracks occur due to deformation of the surface due to the penetration of magma.

May 4: An earthquake of magnitude 4.6 occurred in the eastern rift zone of the Kilauea volcano.