The coldest April in 99 years, but the MET Office tries to divert people’s attention by talking about “frostiest” instead of “coldest.

“This is how the MET Office downplayed the coldest April in England in the last 99 years (CET’s Central England temperature records go back many hundreds of years),” says Argyris Diamantis of the Netherlands.

“Many farmers and fruit growers have suffered huge losses.”

In fact, it was cold all over Europe.

It was a cold April all over Europe.

Temperature anomaly through April 30 relative to the 1981-2010 climate norm. 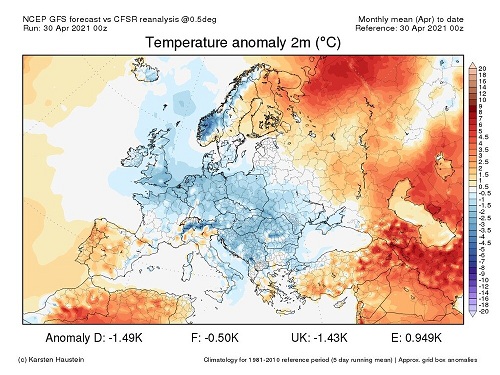 Poland has the coldest temperature in 24 years, Germany in more than 40.

April 2021 is coming to an end, and we want to forget about it soon.

Abnormally low temperatures with frosts and snowfalls have affected not only Poland, but also many other European countries.

The coldest April in Poland in 24 years

According to the British Meteorological Office, the UK has an average of 13 days with frost (April 27 data)! The new record beats the previous record, set in 1972, by at least 2 days. Many farmers and fruit growers suffered huge losses.

In France, there were also significant losses in grapevine cultivation. The famous French wine may be less on the tables.

Germany is very disappointed with April because the exceptionally warm end of March and beginning of April filled us with optimism about the remaining warm days. But a downward jet stream far to the south quickly dropped the “cold bomb” with a prolonged advection of cold air coming in from the north, including the Arctic.

April 2021 in Germany is the coldest April since 1980: the 2nd coldest on record

The end of April 2021 brought 13 frosty days to Germany. In this respect, it was the 2nd coldest in the history of measurements. More days with frost were recorded in Germany only in 1929. The average temperature in April this year was 6.1 degrees Celsius. This is -1.3 degrees lower than the average for the baseline period of 1961-1990.

April 2021 was a cold month in Europe from the British Isles, through France, the Benelux countries, Germany, Poland, parts of Norway to western Ukraine and the Balkans. Sustained low temperatures, including frost, significantly delayed plant vegetation.

This year’s cold April delayed the onset of phenological spring.