Everything that is happening now has already happened 42,000 years ago and ended with the mass extinction of all living things. 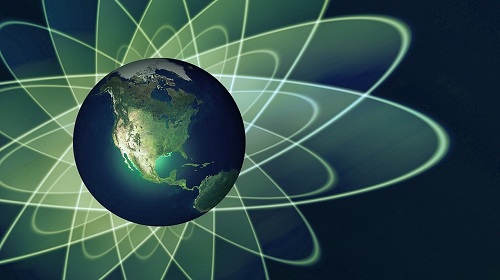 The drop in the power of the Earth’s geomagnetic field ~ 42 thousand years ago, in combination with the Great Solar Minimum, caused significant changes in the concentration and circulation of atmospheric ozone, provoking synchronous global climatic shifts that caused serious ecological changes and mass extinction of species.

New research published in the journal Science suggests that warm interglacial conditions (surface temperatures within 1 ° C of today) persisted from 54 to 42,000 years ago, although CO₂ levels were around 200 ppm at the time.

According to the reconstructions of the paleoclimate, for 20 thousand years between 55 and 35 thousand years ago, the CO₂ concentration fluctuated around 200 ± 10 ppm.

However, it is at this stage that a new study by 33 authors suggests abrupt and dramatic changes in the Earth’s magnetic field (for example, “a 10-fold decrease in the blocking of cosmic rays”) about 42,000 years ago brought a synchronous global climate “from interglacial conditions (with surface temperatures in the range of 1– 1.5 ° C from today’s 54-42 thousand years ago) to a completely glacial state.

The catastrophic consequences of global “widespread cold conditions” caused by the Great Solar Minimum, and “significant decrease in surface temperature” led to a drop in sea level by tens of meters, the disappearance of lakes and fresh water sources.

In North American Laurentida, the ice sheet has moved more than 1000 kilometers in just a few thousand years, followed by the destruction of the habitat of the megafauna (eg woolly rhinoceros, mammoth, bison), leading to their disappearance.

It was previously believed that the entire interval of ~ 90,000 years, sandwiched between the last interglacial ~ 120,000 years ago and the Holocene (11,700 years ago to the present), gradually and slowly plunged into glacial conditions for many millennia, and that humanity was responsible for the last glacial peak in the death of megafauna.

earlier it was believed that humanity played an important role in the disappearance of the megafauna, but now it turned out that people have nothing to do with this at all. Habitat destruction caused by a dramatic climate change 42,000 years ago led to the extinction of large mammalian species.

So, once again, paleoclimatic records confirm ubiquitous and “synchronous global climate change” occurring without any obvious effect of changes in atmospheric CO₂ concentration on this process.

It was previously believed that the entire interval of ~ 90,000 years, between the last interglacial ~ 120,000 years ago and the Holocene (11,700 years ago to the present), gradually and slowly plunged into glacial conditions over many millennia, and that humanity was responsible for the last glacial peak and death of megafauna.

Some key quotes from the article:

“The minima of the geomagnetic field ~ 42 thousand years ago, combined with the Great Solar Minima, caused significant changes in the concentration and circulation of atmospheric ozone, causing synchronous global climatic shifts that caused serious environmental changes, disappearances and transformations in the archaeological record.”

“Geomagnetic excursions can change latitudinal temperature gradients due to a sharp increase in cosmic radiation and a decrease in ozone concentration.”

“Warm period from 54 to 42 thousand years ago during the last glaciation with annual temperatures ranging from 1 ° C to 1.5 ° C from today.”

“The weakening of the magnetic field strength to a level of <28% of the current level during the reversed Lashamp phase led to periglacial conditions, which occurred at 42.23 ± 0.2 thousand years ago.” “10-fold decrease in the hardness of blocking cosmic rays” “Widespread cold weather” “significant decrease in surface temperature” “LIS [Laurentide Ice Sheet] expanded rapidly from a local minimum 42,000 years ago … the ice sheet may have expanded by> 1000 km by ~ 39 to ~ 37,000 years ago.”

Earlier, another study was published: “The almost complete disappearance of the Earth’s magnetic field 42 thousand years ago could lead to the extinction of the Neanderthals.”

About 42 thousand years ago, the Earth experienced a magnetic pole change, which coincided with severe climatic changes and mass extinctions, concluded an international team of researchers. The research results were published in the journal Science.

Scientists call the climatic changes that occurred 42 thousand years ago the Adams event, and the last change of magnetic poles, which occurred in the middle of the ice age – about 41-42 thousand years ago, was called the Lashamp event. Until recently, scientists were not only a mystery about the more accurate date of the change of the poles, but also how this change affected the climate and life on Earth.

To learn more about this chapter from the history of the planet, climatologists were helped by the New Zealand cowrie tree, the trunk of which was discovered about two years ago in Northland, the northernmost region of New Zealand, in sediments over 40 thousand years old.

“Thanks to radiocarbon dating, researchers were able to track changes in the amount of radiocarbon exactly at the moment of the displacement of the magnetic poles, which, together with data on the age of trees around the world, made it possible to build a climate model of that time and reconstruct a chain of environmental events,” the message says.

Scientists managed to find out that that period was associated with electric storms and frequent auroras. Due to the migration of the poles, the Earth’s magnetic field during the Adams event decreased to 0-6% of its current strength, which significantly weakened the Earth’s protection from cosmic radiation. In addition, the Sun experienced several large solar minima at that time, which made the protective “shield” even thinner. As a result, the ionized air, as noted by the researchers, practically “roasted” the ozone layer and launched a wave of climate change across the planet.

The authors of the work suggest that the extinction of megafauna on mainland Australia and Tasmania 42 thousand years ago was associated with the Adams event.

“The article suggests that it influenced the extinction of the Neanderthals and the widespread distribution of rock art during that period. Perhaps, scientists note, the new environmental conditions forced the ancient people to seek refuge in the caves. There the first drawings survived, and on open surfaces they collapsed. , giving the impression that rock art suddenly emerged 42,000 years ago. ”

The authors of the scientific article are concerned that today the North Magnetic Pole is also shifting, and the magnetic field is gradually weakening, which may indicate a repetition of the scenario of the past.