Exceptional cold: The average temperature in Antarctica is minus 61 degrees Celsius

While the people of the Earth are told that the ice in Antarctica will soon melt as a result of “global warming”, the reality is quite different.

Amid record hot summers in most regions of the Northern Hemisphere, accompanied by devastating fires, floods and hurricanes, Antarctica found itself in a state of deep freeze. This usually happens during the winter months on the southernmost continent, but 2021 was different.

The cold was exceptional even for the coldest place on the planet.

The average temperature at the Amundsen-Scott station at the South Pole between April and September – minus 61 degrees Celsius – was the coldest on record since 1957. This was 4.5 degrees below the last 30-year average.

This temperature record was confirmed by Richard Callater, a scientist in NASA’s Division of Global Modeling and Assimilation.

The temperature averaged for September was also the coldest on record at the South Pole, David Bromwich, a polar researcher at Ohio State University, wrote in an e-mail.

Extreme cold over Antarctica contributed to sea ice levels around the continent in August reaching the fifth highest level on record, according to the National Snow and Ice Data Center.

Maximiliano Herrera, a climatologist who tracks extreme weather around the world, reported that temperatures at Russia’s Vostok station dropped to minus 79.4 Celsius on Thursday (Sept. 30), just one degree (0.6 Celsius) below the world’s lowest temperature recorded in October.

Current temperatures are still a far cry from the continent’s lowest on record. In 1983, temperatures dropped to minus 89.6 Celsius in the East. Satellites have recorded temperatures as low as minus -98 degrees Celsius.

Matthew Lazzara, an Antarctic meteorology expert and scientist at the University of Wisconsin, has been watching the temperature at the South Pole with trepidation from his office in Madison in recent months. In one interview, he said that on many occasions the temperature was around minus 100 degrees. He has traveled to Antarctica many times over the years to support his research.

“In these temperatures, it’s hard to fly airplanes,” he wrote in an e-mail. “At temperatures of -50°C to -58°C, you put the plane at risk: the hydraulics freeze or the fuel turns to jelly.”

He once visited the South Pole in late October. “I had the opportunity to experience -50°C weather … with a wind chill on top of that. I was *excited* to be wearing 75 pounds of extreme cold weather gear to stay warm,” he jokes.

The reason for this cold anomaly

Scientists attribute the intensity of the cold to the very strong polar vortex, or ring of strong winds in the stratosphere surrounding Antarctica.

The stratospheric polar vortex is a seasonal phenomenon. In the Southern Hemisphere it forms in the fall, persists through the winter and weakens, and reverses in the spring.

The strength of the vortex is related to the weather on Earth, said Krzysztof Wargan, a scientist in NASA’s Global Modeling and Assimilation Division. A strong vortex is associated with low surface temperatures, he says.

Whether the vortex is strong or weak depends on the cycle known as the Southern Annular Mode (SAM). The regime is currently in a positive phase and the vortex is intense.

“For the most part, the winds in the polar stratosphere have been stronger than usual due to the jet stream shifting toward the pole,” Amy Butler, a NOAA atmospheric scientist, wrote in a post. “This keeps the cold air over much of Antarctica.”

Butler writes that a strong polar vortex not only makes the air over Antarctica very cold, but it also accelerates processes that lead to stratospheric ozone depletion, which, in turn, could make the vortex even stronger. This year, the ozone hole over Antarctica is much larger than average, about 24 million square kilometers, a reflection of the strength of the vortex.

What about solar activity? 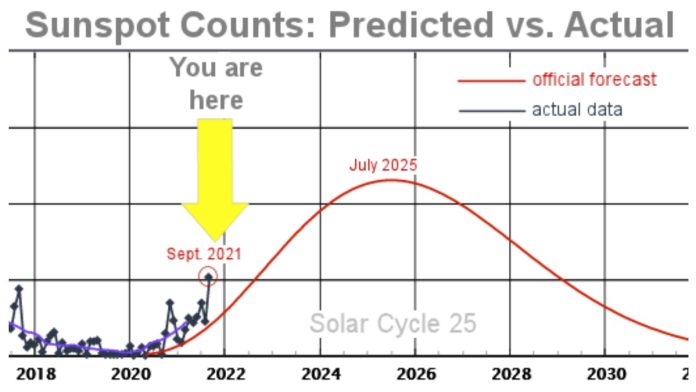 It looks like September 2021 was the most active month for solar activity in terms of average sunspot number since February 2016, as we continue to come out of the SC24/25 solar minimum.

Scientists always gloss over this as a possible source of global cooling!

But, of course, they never stop talking about the seriousness of global warming, arguing that Antarctica is notorious for wild fluctuations in weather and climate that can go against global trends.

Meanwhile, we just witnessed the hottest (or joint hottest) October days in recorded history for 4 countries.

At present, however, the Antarctic cold is staggering. The temperature at the South Pole is minus 77 degrees at the time of publication of this article.

Solar Cycle 25 continues to exceed all expectations. The number of sunspots in September 2021 was the highest in more than 5 years.

And for the 11th consecutive month, the number of sunspots is well above the official forecast:

“An international panel of experts co-chaired by NOAA/NASA to forecast the 25th solar cycle has released its latest forecast for the 25th solar cycle. The consensus of the forecast: peak in July 2025 (+/- 8 months), with a smoothed sunspot number (SSN) of 115. The panel agreed that cycle 25 would be average in intensity and similar to cycle 24. If the solar minimum prediction is correct, this would make the 24th solar cycle the 7th longest in history (11.4 years).”

The higher-than-expected sunspot count suggests a stronger cycle with a peak in late 2024 rather than mid-2025.