Extremal went down into the bubbling crater of an active volcano 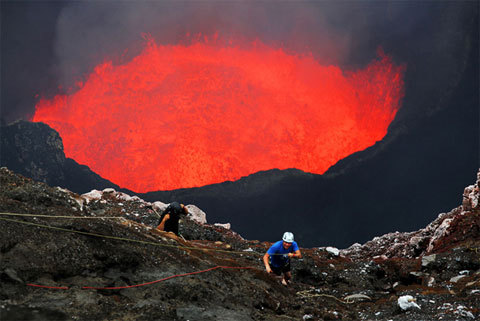 Dare to stand on the edge of a bubbling active volcano? Desperate British zone Hosli decided on a bold step, and without explicit emotions.

Video shot by new Zealand Director Geoff Makkli, had made the island of Ambrym in the South Pacific ocean. Hosli, says that before turning his interest in photography and travel, I managed to get a cadet of the Australian air force.

“Travel to remote corners of the world became for me an invaluable experience, writes, Holy in his biography. — I was on the island of Ambrym in Vanuatu to live a few days in this tribe, but it turned into living on a volcano in Vanuatu for two months, a meeting of the Nativity on the island and familiarity with the cyclone… And it was all my initiative.”

Site Director Makkli also talks about his interest in nature and, specifically, to the volcanoes. The Director says: “My shooting in the last few years were associated with my passion for nature, and, in particular, to nature in its most violent manifestations: erupting volcanoes, hurricanes, cyclones, typhoons, tornadoes… the Greatest spectacle on Earth”.

The volcano in the centre of the island stands deserted on Ambrym Caldera with an area of 100 sq km In two craters near the top are lava lakes. With the exception of human settlements, the island is covered with dense jungle.