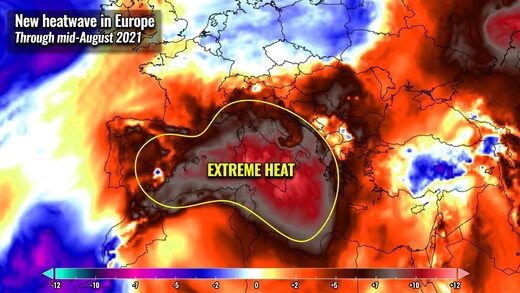 ﻿
A heat wave across the Mediterranean for much of this week caused temperatures in Siracusa, on the island of Sicily, Italy, to reach 48.8 degrees Celsius on Wednesday. This is the highest temperature ever recorded in Europe.

A new round of brutal heat came to the eastern Mediterranean on Sunday and gradually shifted westward throughout the week, bringing record heat not only to southern Europe, but also to areas from the eastern Middle East to northern Africa.

The current historical high for Europe was recorded in Athens, Greece, on July 10, 1977, when the thermometer rose to 48.0 C.

Normal high temperatures in central and southern Italy in mid-August are 29-32 C.

Firefighters continue to fight fires in Sicily, where temperatures reached a European record high of 48.8C (119.8F) on Wednesday, August 11.

In Italy, the high pressure area that caused this heat wave has been nicknamed Lucifer. Italy’s Ministry of Health has issued a red alert for extreme heat in several regions of the country for Friday.

On the other side of the Mediterranean Sea in the African country of Tunisia, several new records were set.

Temperatures rose to 49 C in the capital of Tunisia on Tuesday, setting a new high temperature record. This broke the previous record of 46.7 C, which was set in 1982.

In Bizerte and Beja in northern Tunisia, temperatures also reached 49 C on Tuesday, setting new records for those cities.

Farther south, in the city of Kairouan, Tunisia, the temperature rose to 50.3 C on Wednesday. This is the highest reliably recorded temperature in the country, breaking the previous record of 50.1 C set in Al Burmah on July 26, 2005.

The power grid was overloaded in some parts of the country on Tuesday as residents stayed home and turned on air conditioners to beat the heat, causing power outages.

Lucifer is forecast to continue shifting westward for the rest of the week, spreading the sweltering heat to the Iberian Peninsula in southwestern Europe.