First losses due to climate catastrophe 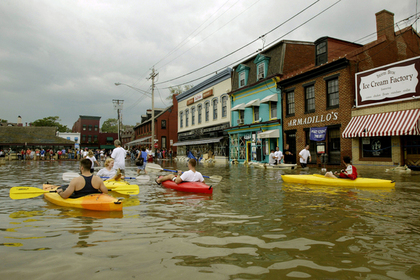 Environmentalists at Stanford University (USA) estimated the economic losses due to climate change in Annapolis, Maryland, located on the Chesapeake Bay. It turned out that in 2017, in the historical center of the city alone, the damage from frequent flooding amounted to about 80 thousand dollars at least. Reports the Science News about it.

Scientists have created a database of floods, using images posted on social networks at the same time that tide gauges (instruments for measuring sea level fluctuations) recorded high water levels. This was done in order to exclude floods caused by torrential rains. According to experts, in 2017 there were 44 floods due to tides, classified as weak, moderate and strong.

After that, the researchers studied the work of parking services. It turned out that in 2017, natural disasters caused a significant decrease in the number of transactions from 37 to 89 percent, depending on the strength of the flood. This corresponds to a decrease in the number of visitors to the historic center by 1.7 percent, that is, by three thousand people. Financial losses for 16 enterprises in Annapolis amounted to 0.7-1.4 percent, that is, from 86 to 172 thousand dollars.

In the coming years, floods are expected to increase due to continuing carbon dioxide emissions, which will lead to more serious economic damage.