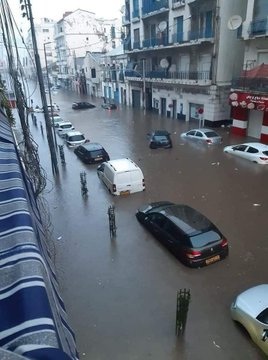 At least one person was killed and hundreds of houses were damaged by flooding in northern Algeria.

The flooding occurred after a storm from September 7 to 8, which brought heavy rains. In Baraki, Algeria province, 63.0 mm of precipitation was recorded in the 24 hours before 8 September.

Algeria’s civil protection service said one person, believed to be a child, died after being swept away by floods in the city of Mila.

Elsewhere, 3 people were rescued from a car stuck in a flooded tunnel in the town of Um el Bouaghi.

The civil protection service was also called to rescue people from several vehicles trapped in flood waters in the city of Batna. About 800 houses were flooded in Boumerdes and 40 houses in Henchel.