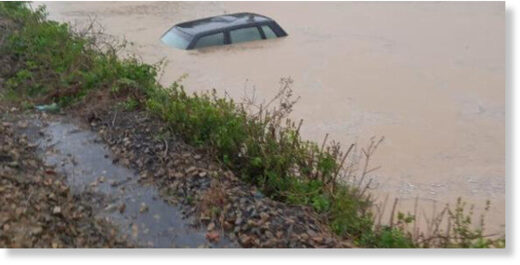 Torrential rains have caused flooding and landslides in the state of Santa Catarina in southern Brazil since June 08, 2021. The municipality and city of Canelinha were the hardest hit, with dozens of homes flooded and 146 people evacuated to temporary shelters.

Other rescues and evacuations were conducted in Brusca, Tubaran and Itajai. CBMS also responded to calls in Balneario and Camboriu. In total, at least 16 municipalities reported flooding and severe weather events, and further heavy rains are predicted.

More than 280 mm of rain fell in Canelinha in the state of Santa Catarina, southern Brazil, in 24 hours through June 09, 2021. At least 7 other locations in the state received more than 150 mm of rainfall during the same period.

Meanwhile, drought conditions worsened in the western parts of the state, and 80 municipalities declared an emergency. The Civil Defense has stated that 3% of the municipalities in Santa Catarina are now in critical condition due to the threat of water supply.