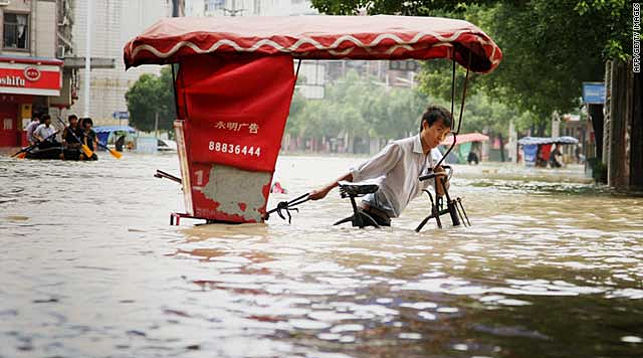 728.8 thousand inhabitants of Liaoning Province / Northeastern China / suffered floods, 3 people became victims of the disaster. These are preliminary data released by local authorities, which specify the damage from the impact of the elements.

From August 2 to 5, the tenth this year, the typhoon “Hajtan”, weakened by the time to the level of the cyclone, and the subtropical anticyclone brought heavy rains to the southeastern and western parts of Liaoning, which turned out to be under their combined influence. In several areas the showers turned into a serious flood.

If the province has an average of 72 mm of rainfall, then in the village of Yonggui County, Xiuyang / g. Anshan / the amount of precipitation, dropped out in just an hour, was 112.5 mm. Livni flooded 22 counties, cities / county level /, district and 7 cities, including Dalian, Anshan, Dandong, Chaoyang and others. The most affected were the Xuyan District, Donggang / Dandong /, Zhuanghe / Dalian / and the Luncheng District Chaoyang.

In the affected settlements, the water element caused disruptions in transport, communication and power supply systems, caused serious damage to farmland and damaged road, water and other infrastructure. 14.9 thousand local residents were evacuated, 790 residential and other buildings were destroyed, over 13.1 thousand hectares of crops were completely destroyed. Direct economic damage from the impact of the elements is estimated at 6.19 billion yuan / 1 am. 6.7 yuan.

In the province, activities are carried out for the life support of victims and anti-epidemic protection, and restoration works are being fully developed.